In the winter of my discontent and lingering Bush Derangement Syndrome, I seek diversion from politics wherever it can be found. One of the distractions I have found is the Volvo Ocean Race.

However, it would be more fun and less impersonal to race with friends I know, so I thought I might entice my pals from the Blogosphere into testing the waters of the world.

On 13 December, 8 real yachts and 82,000 virtual yachts will start the 3rd leg which goes from Cochin, India to Qingdao, China, taking Singapore to port. I would like any of my readers to be in that number!

VORG (the virtual race) has been sanitized so that there are no collisions, no rules of rightaway to be enforced, and no piracy! The demands on steerage consist in adjusting sails and course at least twice a day, although more attention is recommended.

Between now and sometime on 11 December - the deadline for finishing the 2nd Leg - there's an opportunity to register, name, design (paint), and launch your virtual yacht. During this interval, you will be able to test-drive your yacht. And I'll have a boat in the water, giving you pointers. The game allows for communications between boats.

So, I hope some readers, you valiant few, will take me up on this invitation. In hopeful anticipation, I'm hoisting my very excellent second glass of Nerello del Bastardo Marchesi di Montecristo to all who do, as well as to an end to a diminution of politics.
Posted by Doc Häagen-Dazs at 6:00 PM No comments: 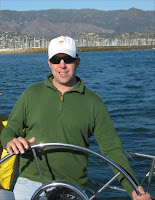 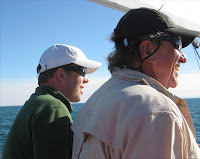 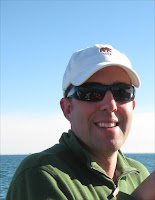 We wrap up the 2008 racing year with a 5th out of 23 boats in steady medium breeze of 12-15 knots. What's even better is that the seas were flat and the water ahead of us always sparkled like it was still early morning. And that was despite all the smoke in the mid-day summer-like air. Even better, J.J. and Bill were able to set and drop the spinnaker without any mishaps, which there would have been if I had been up there, slipin' & slidin' on the foredeck. So a big pair of kudos to both of them. The spinnaker made all the difference: we passed a gazillion boats while it was up and yet were passed by none that I remember. For those who weren't there, on the staggered-start, we went off on starboard tack because the current at X-Mark was going straight toward H-Mark, and it looked like if we were ever going to do it, we should be doing it then. That's what we did, despite the high tide minimizing the kelp factor. However, I'm not sure it helped us much past the start, because by the time we got to D-Mark, there was a monster down-wind current. We barely squeezed by D-mark. I don't think many on the crew realized how close we came 'cause there weren't an audible peep or gasp. If Al had been aboard, he woulda been hollerin', as is his job to do. Just as we squeezed by, Prime Time tried to over-take us to leeward but failed to make it and had to tack off behind us and never recovered!

Thanks, also, to Bhrian for shanghaiing new-guy, Tennessee. The time before Tennessee rode our rail there was no wind, so it was good to have him experience a real action-race when the boat's movement could actually be detected!