I Need to Get an Updated Hoodie 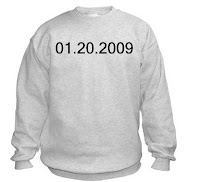 Late in 2008 I bought this white hoodie from Cafe Press. I don't recall what I spent but whatever it was, it was well spent. It warmed me considerably that winter. And it not only served as a barrier against those brisk mornings on the dog walks in the off-the-leash park. People meeting me on the path would ask me, "What do those numbers mean"? I would smile and respond, "Think about it". Those mornings transitioned from December into January. Gradually, the expressions of puzzlement gave way to broad smiles and even some thumbs up.Even a few HOO-AAH's. A week after Inauguration Day, the hoodie probably became passé and today it probably is in that box in the corner of my garage. I could have dragged it out yesterday to wear it on the Martin Luther King Day march up to the Arlington Theatre. Except we are now having spring and it was just to damned wonderfully warm for it to have crossed my mind. Instead, at the time I otherwise would have been on the dog path, I was trying to clear a paper jam in my printer. I had extracted a football sized component from the infernal machine when I was distracted by a voice on the TV in the living room. 18 minutes later, Ballou nosed me with the question, "Why have you been doing nothing except standing there in front of my couch all this time when we could be walking?" The 2nd Inauguration of our 44th President proves to all of us that 01202009 was not a fluke or a token, however Mitch McConnell might have hoped otherwise. In those concise 18 minutes, we heard one of the best Presidential addresses speeches in history. I don't presume to predict that #44 will be an all-star in history, or merely just another varsity player. As he said yesterday,

I just count myself to be among my fortunate contemporaries to have lived long enough to see what, in the 1960's, I never dreamed I could see. And I never thought so much could be said, and so eloquently, in 18 minutes.
Posted by Doc Häagen-Dazs at 8:23 AM 6 comments:

Marked the New Year by sailing on my best friend's new boat, with a few old friends. Loads are heavier. This C&C is a few feet longer than Das Boot. Faster, newer, etc. And needs to be sailed by younger hands than mine. Moving around on deck, grinding wenches are a challenge for this old man. 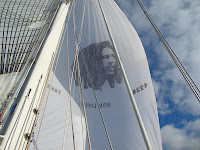 The purpose of the sail was to get the light wind spinnaker out of the bag for the first time and to raise it. That was surprise no one was prepared for.
Posted by Doc Häagen-Dazs at 7:59 PM 7 comments: