Wednesday night's race was another light no- wind struggle. Well, I always say there's always some wind. The problem arises when there's not enough wind to contend with current.

But Wednesday night's race from start to finish was a doldrums drifter. Boats were so close together for so long and so slow that you could talk to each other, without VHS. 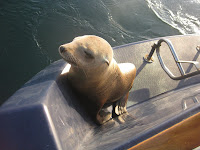 15 minutes into the race a sea lion pup swam around the fleet, and then hitched a ride on our boat. Now, isn't that slow - even for a sailboat race? He (gender assumed) plopped up on our stern swim platform, for a bask in the failing sunlight. All the boats around us were greatly amused.

Our stowaway abandoned yacht after about 20 minutes to swim around the fleet looking for a more comfortable roost. Within five minutes he came back and boarded us again. After deliberation, we decided to name him Tipperary. 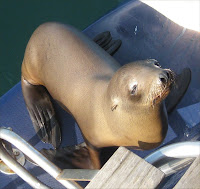 He definitely made like he wanted to ascend into the cockpit, but couldn't master the steps on the folding ladder. We offered ol' Tip some Coronas but all we had was cold. He/she would have preferred it warm, me thinks.

Tip stayed with us into the slip. Against all advice - I couldn't resist - 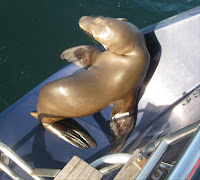 I patted him (with gloved hand) on the pate as we left the Marina.

Because Tip was obviously a sick puppy, all of us reported his presence to the local Marine Mammal Center and the Harbor Patrol. Between them, he was rescued later that evening. Our predominant fear is that his behavior is attributed to Domoic Acid Poisoning. I wish a Tip a full recovery and a long life, but that's without any knowledge of his prognosis. 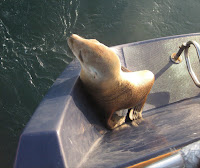 Whether he makes it or not, I feel warm that he picked our rescue-friendly stern for some of his last moments. That's probably close to what I'd pick for myself, too, if allowed such an option.

We finished this particular race in last place. But the 1st-rate company aboard made that bearable ...
Posted by R W Rawles at 7:16 AM No comments:

I see now why I'm losing my shirt and taking it in by shorts simultaneously in VORG: I haven't done enough distant racing.

In last Friday's 17-mile race we did miserably. Helene's Intuition won it despite almost missing the first mark on the course. 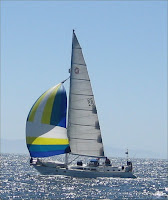 (Go figure: sail that far out of your way and still get a bullet certainly brings into question the validity of the handicapping.) Cheryl Anne (right) took second. Zephyr, sailing high to get some speed out of the light wind, lost her time to us. But Jules found wind below us and passed to leeward. In the end, we captured an unnoteworthy 6th out of nine starters. Looking at the times, my 90-second late start - though inexcusable - was not a factor.

There was not enough wind to sail rhumb. My crew knew it. I didn't. When I went off watch, and later when I went forward to fly the spinnaker, they connived, conspired, and sneakily heated the rig up. It was emblematic of the major on board debate in almost every race, even the short ones. Crew wants speed; I want direction. 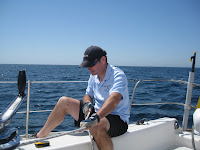 Would a GPS at the helm resolve all conflicts by rendering constant VMG? I don't know who on my crew I can trust to give me a good ROI to justify it! 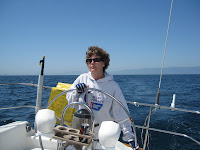 I do not want to be the one whose eyes are always on the GPS. MVP is already multi-tasking.

Bubbles relieved me from the helm, so I could stretch my legs (in a horizontal position below) and join JJ is flying the spinnaker. Mark worked his magic, as usual in flawless spinnaker sets and drops. 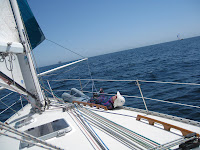 We didn't really get our wind strength until forty minutes before the finish. Which meant that we got all the fresh cold air in our faces and driven through our bones on the way back.

Everyone was cold and tired when we returned to the harbor. I pushed us to try a backing in. Two attempts were insufficient and we gave up for the day and nosed-in to slip. Later, Captain Helene opined that what I encountered was 'prop swing'; she said, as I re-construe it, was to line it up, directly up wind, gun it in reverse and immediately shift into neutral and drift in stern first. Worth a try: it's the key to icing Wet Wednesdays, guaranteeing a start regardless of the wind strength.
Posted by R W Rawles at 9:28 PM No comments: 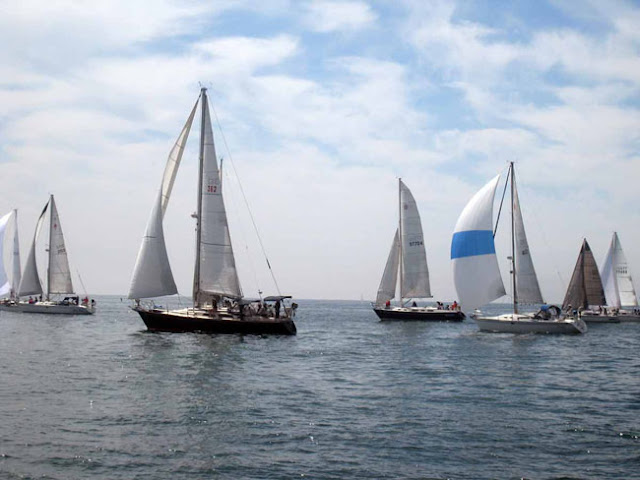 Psyché's Song
Posted by Doc Häagen-Dazs at 9:25 AM No comments: