Time to Pass Command on to Newer, Younger Generation(s)! 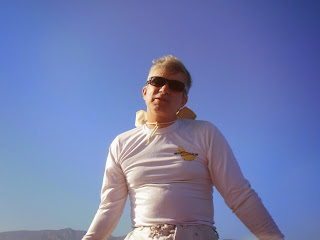 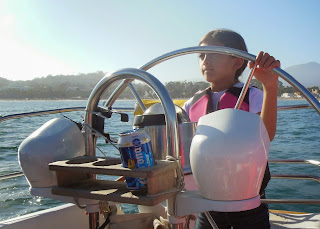 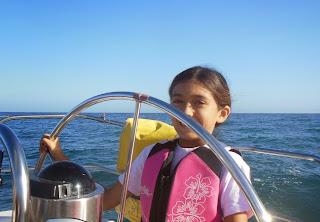 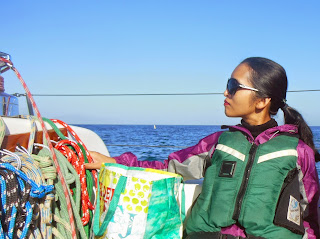 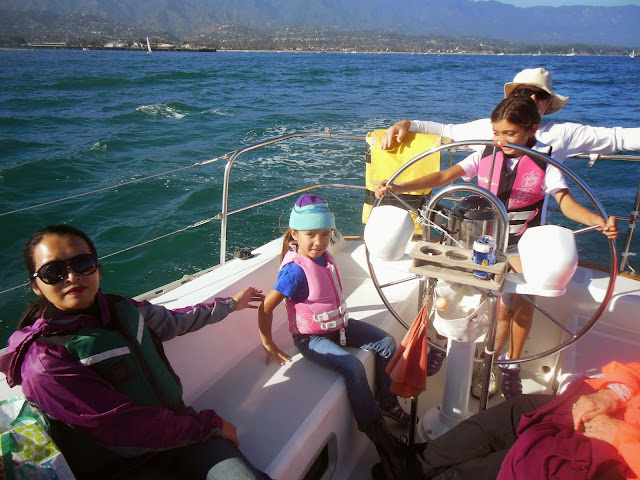 Posted by Doc Häagen-Dazs at 8:12 PM No comments:

14 boats started in 4-5 knots of wind from the south on a course which was ultimately shortened.

We got a staggeringly fine start given the power shortage. Even though we knew it wasn't going anywhere for us in the standings, we had a decent sail.

The only thing I would have done differently was to try the chute on the first leg. Crew suggested the light blue. I guess I didn't think it worth the effort, especially with the traffic snarls with other fleets. Instead, I eventually hyper-extended the jib into a wing-and-wing effort. Worked out. Some.

Any hour on the water beats any day on land. Surely.
Posted by Doc Häagen-Dazs at 8:50 PM 2 comments:

Not Much to Say About Tonight's Twilight Race

Another perfect start in another 5.4nm triangular race with 13 other boats in a 13-20 knot breeze. ¾ of Das Boot's crew was aboard. Surfer Dude was missing on account of work and The Kid deserted in favor of another boat needing his 200lbs more than ours. But our team was up to the task.

This race was all about our duel with the C&C. On the first downwind leg, she pulled ahead under spinnaker. Before gybing at the reaching mark, the C&C doused her chute. On the following leg we caught her, but could not pass her to weather or to leeward. 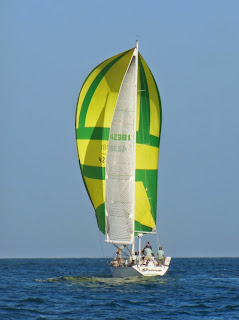 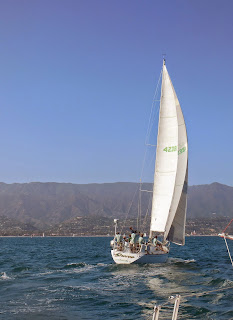 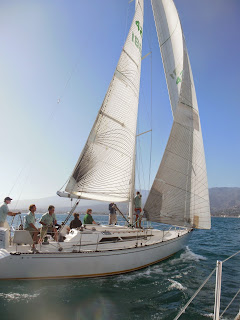 On the final beat, we lost a place to a multi-hull and crossed the finish line in 5th place. Das Boot corrected out to 1st Place by 2 seconds.
Posted by Doc Häagen-Dazs at 9:26 PM 8 comments:


We were presented with a steady 16+ knots of wind blowing from a slightly more northerly direction. Didn't understand initially how significant that would turn out. The hard core of the crew, albeit with two valuable members missing, turned out. Race Committee gave us a 4.68nm triangular course to traverse.

Nailed the start. That was nice for a change. The secret in a good breeze is to approach from below with velocity. Basic. Pushed the feisty Alerion up a bit. Escaped a sandwich between to starboard tackers and early tacked off to port to the beach. Only the Soverel, having tacked at the pin, was there. The breeze was coming out of the corner of the beach which is where we tacked back to port. Sailing very hard on the wind just outside the swim buoys, we were close on the heels of the Soverel.

I Have Lost My Competitive Edge

There are sure unmistakable signs. 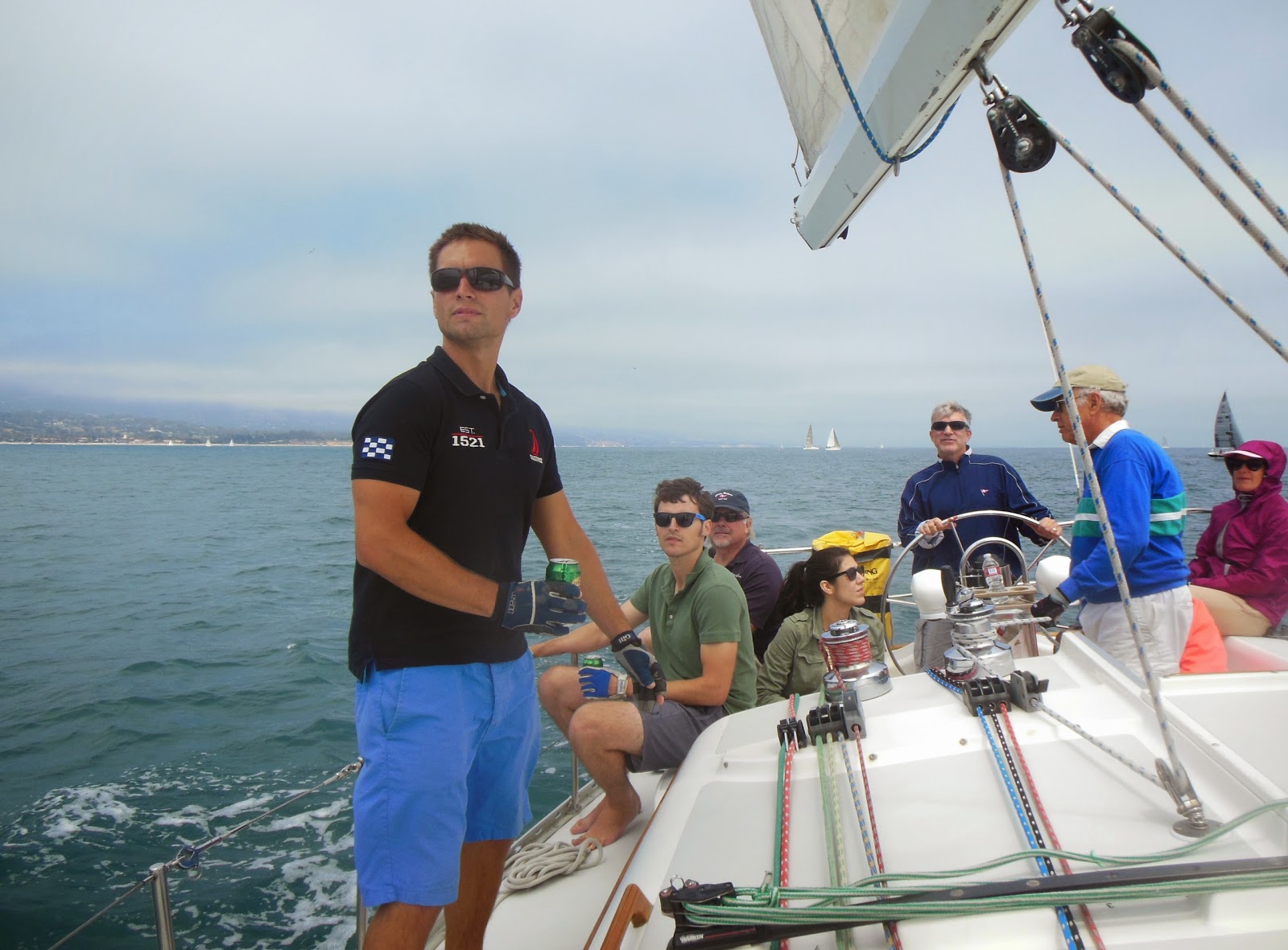 Today we had nine aboard. If Foredeck hadn't cancelled and not brought a long his father as he had hoped, it would have been two more. For Das Boot, a full race-competitive crew numbers seven at the max. Any more -- they become "guests" or "passengers". Clearly, this owner/skipper has lost the capacity to say "No". Even worse from his competitive perspective of the past, he didn't seem to mind the crowd.

With winds expected to be under 9 knots, I pulled out a spinnaker bag found in the outer regions of 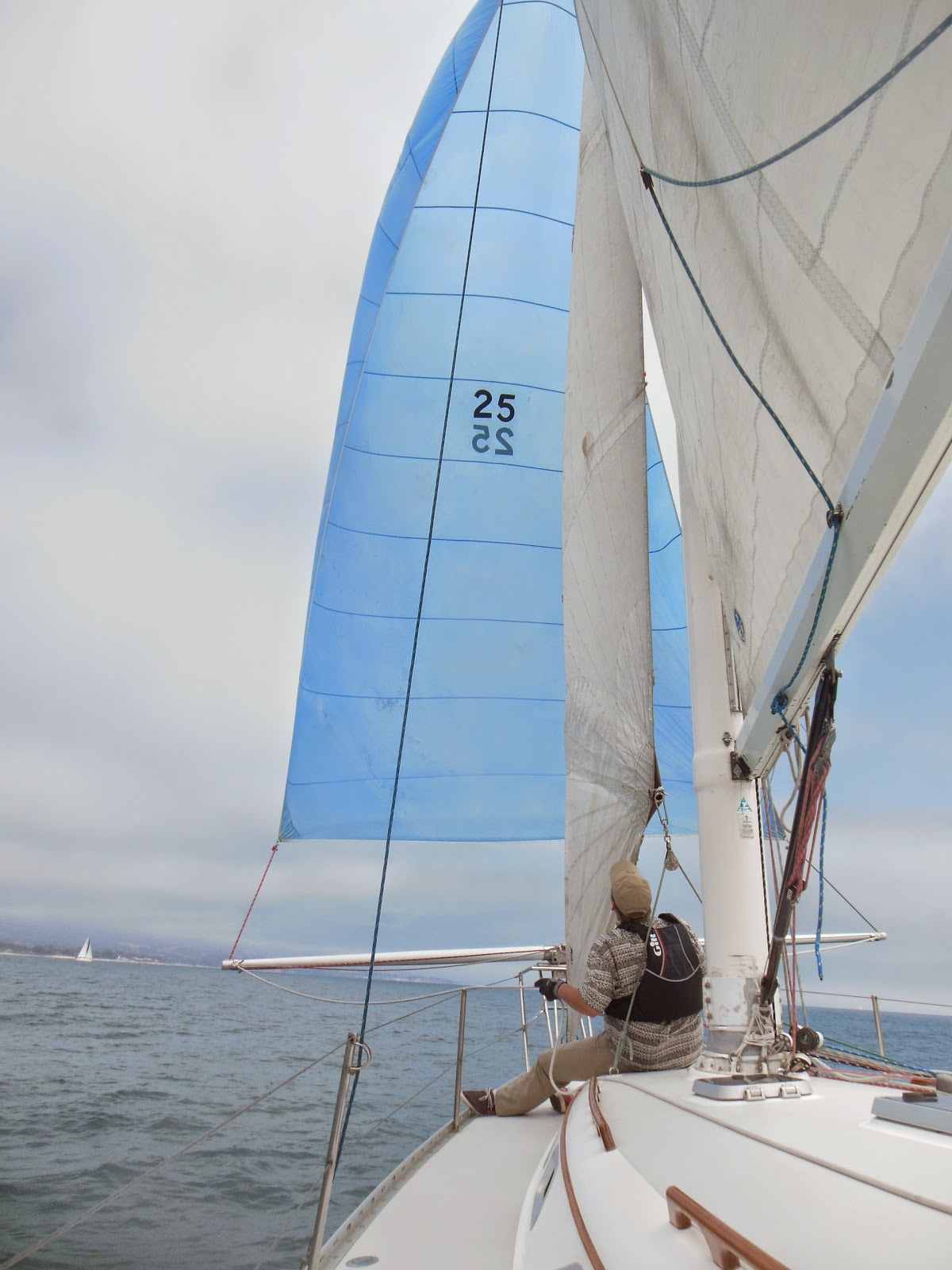 my garage. Had no idea about its history. Was it a full-hoist chute purchased 2nd hand years ago? Was it off some other boat we sold off decades ago. But since I fully expected we would be taking it in the trousers today, why not see what we had? What I didn't expect was to have plenty of time on the water before the start to try it out. Without the scars and patches of our Frankenstein No. 2 spinny, this blue chute looked beautiful. Even if a little on the under-sized side. We elected to use Frankenstein No.2 for the race.

There is little more to say. I continued my string of mistimed starts. In the light wind and heavier than expected current, I managed to be pulled into the port pin, touching it, before my starting time. So I did not pay for it. We sailed the whole race at the back of the pack, concentrating on putting all the guests to work. In the last two roundings, we were afforded some opportunities of 'drama' which we played out to Das Boot's advantage. There were more boats finishing after us than I had expected.

On Boldness: Well-Placed and Misplaced

13 boats showed up for today's 5.39nm twilight triangular race in 16-18 knots of wind. What I'm going to remember is the start. Again I mistimed my approach: I was actually at the pin on the starboard end with 60 seconds to go instead of zero. In these circumstances, you don't try to bluff your way down the line, hoping to find a gap between a dozen of hard-driving fiberglass hulls. There won't be anything other than crashes and/or embarrassments. Without hesitating, I told crew that we were "Going to tack and gybe!" And we peeled over on a tack to port and gybed back on to starboard in one fluid, spinning motion, with no time to adjust mainsheet. Bang! To my amazement there was only the well-sailed San Juan below us. We were in her path but she was really not under way: We had the pin end of the line to ourselves. We actually had to slow down a few seconds waiting for the signal.

We were able to tack for the beach when we wanted to and had 'Kelp Island' to ourselves. 4th or 5th around the weather mark, my guys were able to retrieve a loose spinnaker sheet dragging in the water and achieve a decent hoist.

I took the stress out of my old, aching body by surrendering the helm for a few minutes to take some photos.

On the way to the reaching mark, we passed the Hunter to weather. The San Juan showed herself to be a threat to gain an overlap to leeward, so we gybed on to port for the mark. Inside the 3-boat length radius I hailed "No Overlap" and called for room, half-bluffingly. "Starboard" was the response from the San Juan. I was relieved that San Juan was applying the wrong rule for this situation, and hailed back,

But once around the mark, I mistakenly bet that the Ranger 33, sailing without a spinnaker, would not luff us up. (In his shoes, I would have!) By the time we recovered, the San Juan was by us.

Trophy Wife and CC took turns at the wheel on the last windward leg. Das Boot finished 5th and corrected out to 3rd.
Posted by Doc Häagen-Dazs at 9:12 PM 3 comments:

Contending with the United States Navy

Whenever the USS Ronald Reagan visits port, I am inconvenienced. The remote on my driveway gate is neutralized. It's part of the defensive shell erected around the carrier. Friday night we were particularly inconvenienced. Reassured by a call to the Harbor Patrol, Trophy Wife reassured me that that problem had been fixed. We went out to dinner without a house key to the front door. The remote closed the gate behind us as we left the drive way. So, no problem. Right? Of course there was a problem: it wouldn't open on our return. Neighbors were out so we had to call a locksmith. There are several lessons herein. 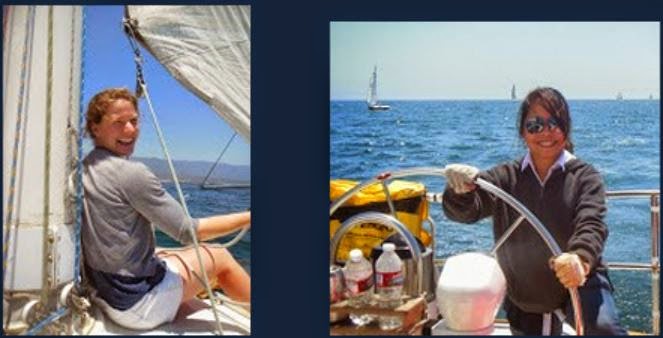 And whenever the Reagan calls in recent years there seems to be a race on that weekend. There wasn't one scheduled this year, so one was put together.

Around noon today, 17 boats started in 15 knots on a 4.6nm windward-leeward course. Each yacht had one or more Reagan personnel aboard as guest crews. Das Boot drafted two delightful young midshipmen (midshipwomen actually) and we put them to work: Mary trimmed our spinnaker for two runs & Christine drove the boat for the last quarter of a mile over the finish line. A good time was had by all.

Hopefully that aircraft carrier will leave tomorrow and I can open my gate again.
Posted by Doc Häagen-Dazs at 7:22 PM 6 comments: