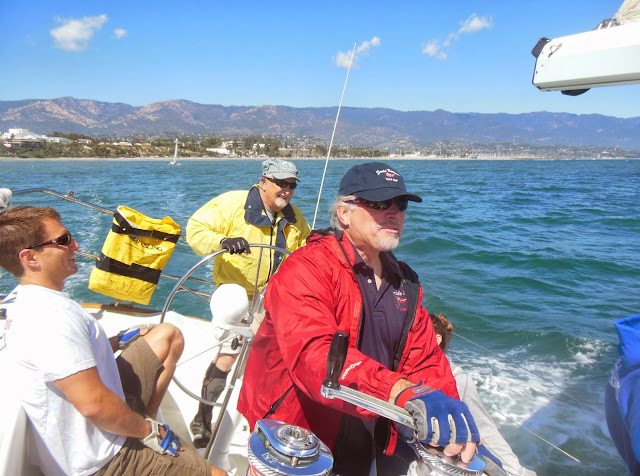 Breakfast with my grand children.

Thanks to my priceless crew: That they can wind up this ol' man & keep him going long enough. And fix Das Boot when she needs it.

I have only pride in them. And gratitude.
Posted by Doc Häagen-Dazs at 7:44 PM 3 comments:

This story is best told in pictures.

This morning, I consulted a weather site.
Read more »
Posted by Doc Häagen-Dazs at 8:37 PM 3 comments:

Spring Training Is Over

Twilight Spring training is over almost as soon as it began this year. Because of Harbor conditions, all we got was tonight's race. We made the most of it.

Trophy Wife is on the 5-week disabled list with a broken wrist. Spinnaker Maestro has been restricted from heavy-lifting. Now he's bowman coach and back-up helmsman. Incredibly critical, because there are only two people in the Western World who understand Das Boot's chute set-up and one of them is owning a competing boat. To replace him, we've brought up a rookie from the minor leagues, J-Man. Based upon his performance tonight, I'm very hopeful that he's staying up with us longer than just for a cup of coffee.

Tonight we had 15 knots to start with. Kelp Island appeared to be erased by recent storms and we were one of only two to discover that. Going into the beach on the weather mark, things looked very hopeful. But there are some fast boats new to our fleet, particularly, a J-100. So Das Boot found her accustomed position, at the tail end of the front half of the fleet. Mistakes were only made on a spinnaker dousing. Skipper error in assigning tasks.

The Ides of March Are Behind Us! 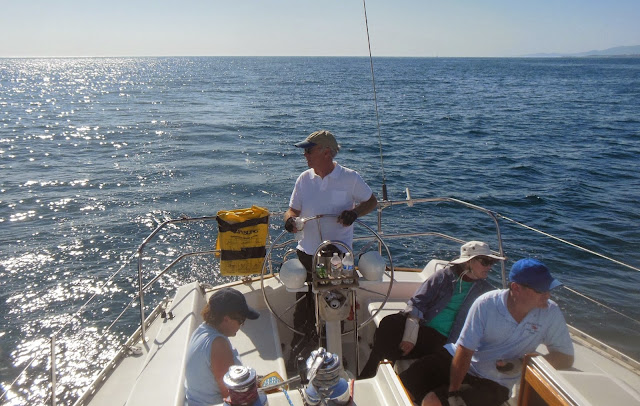 Made it out of the harbor today! And we made it back into the harbor at low tide, too! All 14 boats. And, in between, we made it up to Goleta and Back, for our Fleet's longest race (15.31 nm). Beautiful, warm, sunny, shirt sleeve weather. But not enough wind to go around.

How did we do? Perfect start in 14 knots, but the breeze quickly evaporated, as it were. Two key crew members were missing.

That's my story and I'm sticking to it.
Posted by Doc Häagen-Dazs at 8:58 PM 7 comments: 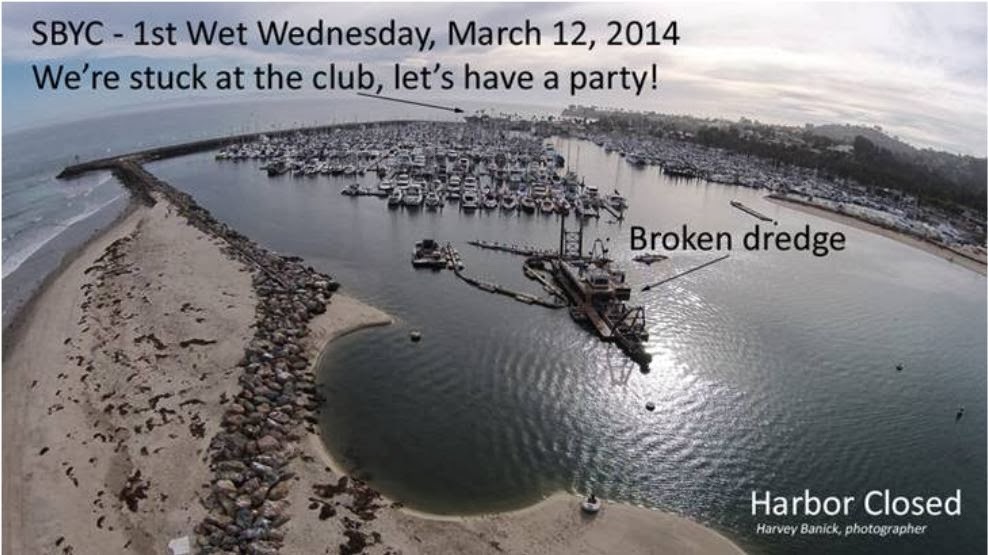 Self explanatory post.
Posted by Doc Häagen-Dazs at 1:57 PM 7 comments:

I normally do not cancel a sail due to weather until we have assembled the team on board and have given ourselves a chance to come to our senses. The reason being that I have learned that the weather is never actually as bad or worse than the forecast. In tomorrow's instance, I expect high seas and winds: perfect weather for Das Boot! But adventure on the high seas is one thing. Adventure in the harbor? Not so much!

I was down there about 90 minutes ago. This You Tube accurately portrays what I saw:

What I think this means is that tomorrow the water in the harbor will not be that deep and that it will resemble a very sandy spinach soup from all of this runoff. I also expect the harbor's channel will be slightly wider than Das Boot's LOA. I am not willing to risk our engine or keel trying to get back and forth to the start line.

So for this reason I am cancelling our Opening Day sail. I hope you receive this notice in time to change your plans!