At Least the Beer Was Cool! 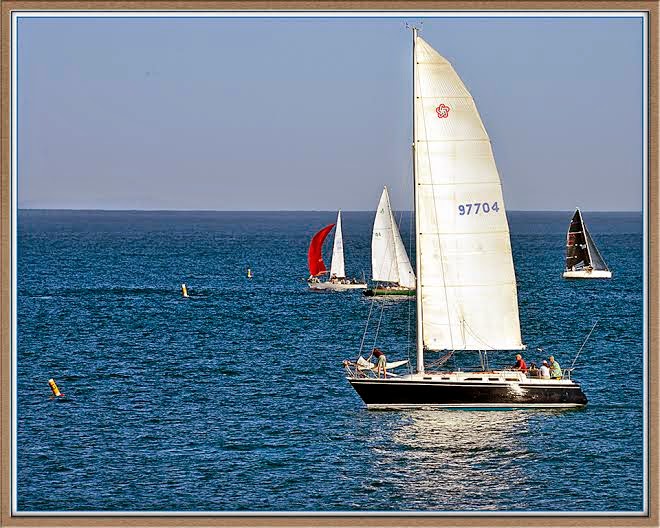 Thank God there were no fires! (Fingers crossed.)

And thank God today's beer can race was not a drifter: 12-15 knots wall-to-wall. Once we were out of the harbor there was some relief from sweltering temperatures.

Skipper was late to the line. Miscalculated. But the breeze was from off the beach. After a couple of early tacks we found ourselves behind the Ranger-33 (situation normal!). We barrelled right through the Sargasso Sea of Kelp, almost directly on to a lay line for the weather mark. 5th around, we lost a place and then gained it back by the reaching mark. Finished 7th out of 14 starters.

Exciting and quick sailing, with wind from a novel quarter. Neat.
Posted by Doc Häagen-Dazs at 8:39 PM 2 comments: 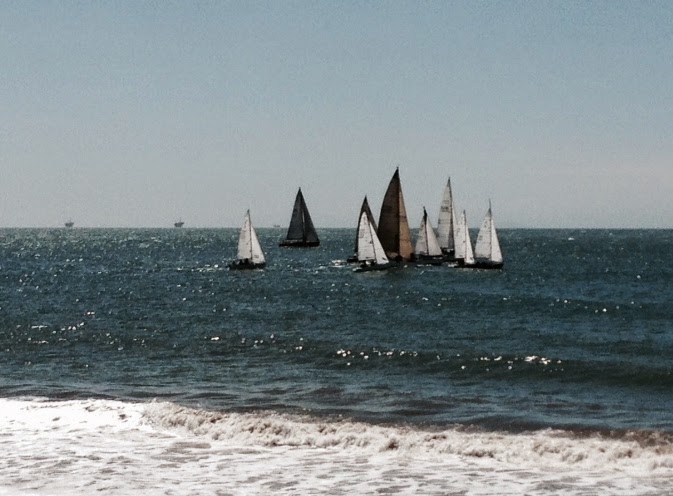 Bought submarine sandwiches to pay the crew (2) off for showing up at Das Boot on time, more than any else. Truth was, I knew in my gut that this old man was not up to sailing an 18nm course in winds between 20 and 35 knots. Not with just two other men. No matter how warm it was.

Any old skipper, as old as I am, has a stomach that churns with many worries he does not share with his shipmates.

In my case, it's not the rig. The keel will fall off before her mast comes down.

It's excessive weather helm, thanks to my huge mainsail, that concerns me. And the pressure it puts on the wheel & steering column. I am dogmatic about not reefing which means in 30 knots I lose control of my boat. Should I give up my dogma instead of X number of racing dates? I could. I've considered it. But with this boat?

Once more with less style. And definitely less satisfaction. 1-3 knots of wind, unsteady. Windward leeward course, shortened. Seas? Well not as flat as they could have been. Short-handed in conditions in which we most need extra hands. Didn't learn much. Hard work. Finished 8th out of 16 starters. 'Nuff said.
Posted by Doc Häagen-Dazs at 9:29 PM 6 comments:

It seemed we were on the water for hours and hours tonight. We never saw 7 knots that I can remember. The south-easterly direction of what wind there was, favored a port tack start. I was sorely tempted even though Das Boot is heavier in displacement than most of the fleet. Displacement sometimes gives you an advantage, once you get some momentum up. With 90 seconds to the start, I regretted my temerity: I saw that J-24 setting up to cross the fleet on port.

We actually did pretty well. I'm getting the hang of tacking this 38-ft Laser in 2 knots of wind. But the fleet was slow. Race Committee had picked the nearest weather mark, of course. But the faster fleets starting behind us eventually created enough bumper-to-bumper traffic around K-Mark to rival any crowded start line.

But it was not boring or depressing, as it would have been had we just been drifting. The breeze never dropped completely and we were able to maintain way. I followed parting instructions from Trophy Wife who is still landlocked with her broken wrist:
Crew exhibited marvellously in this slo-motion game of team-chess. As soon as we could hoist spinnaker, we even passed some boats!

The sun set when we still had 1½ legs on the course to go. We finished under running lights, 7th out of a fleet of 15 starters. 2nd in our group of boats. Important and well-sailed boats had dropped out.

One Mistake Will Get You 4th Place

Got this boo-boo out of the way early. Tried a late barge on the starboard pin. I was too early and I was caught short by the Ranger-33. In the 19 knots of wind the spin gybe was quick if not embarrassing. We followed the Ranger inside at the beach, along with the small yellow boat. It paid off. We were fifth around the weather pin, fourth around the reaching pin, and 3rd around the leeward pin. We corrected out to a 4th out of 15 boats. 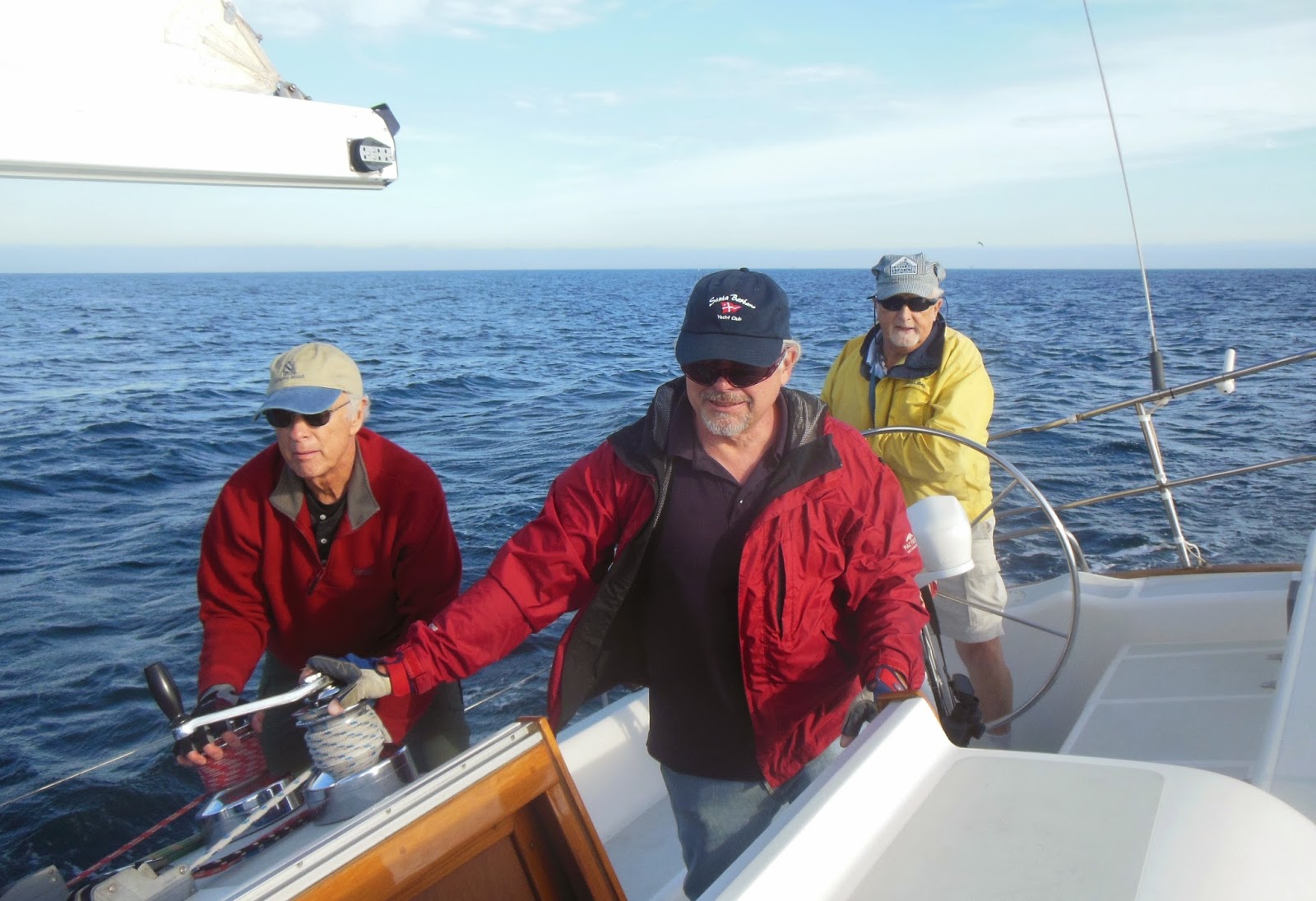 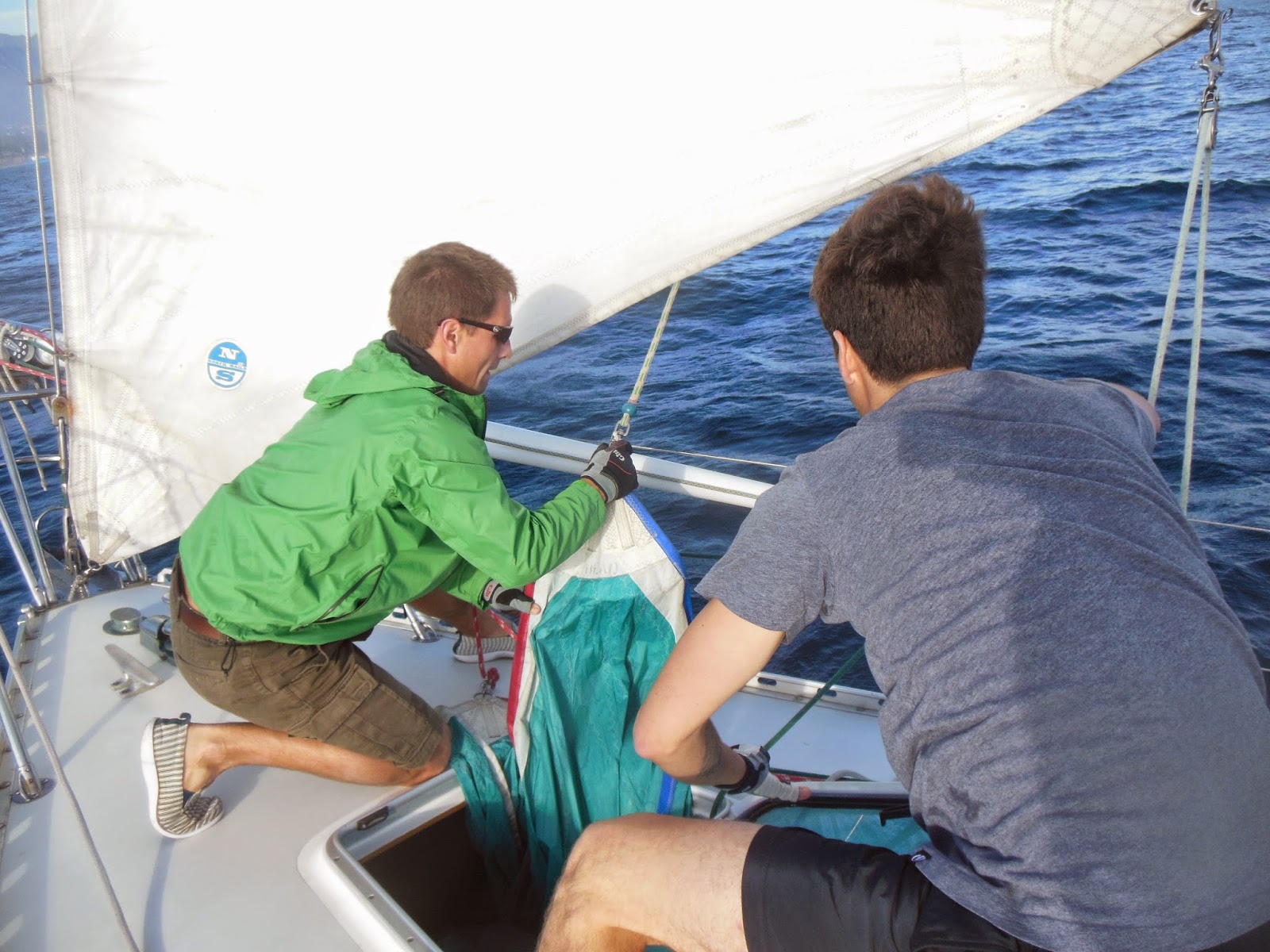 Going out to the start line tonight, we knew we were going to be confronted with the cruise ship Crown Princess as a complication to navigating our assigned race course.

What we didn't expect was a full-bodied surfacing of a whale (which we named Full Monty) less than two boat lengths away. Took us completely by surprise so there is no photographic evidence. Thank goodness Full Monty moved off-venue before the races and the Crown Princess waited until after the race to leave! Otherwise . . .
Posted by Doc Häagen-Dazs at 9:38 PM 4 comments:

Two or Three Mistakes Will Get You 6th Place 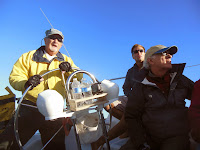 Our new crew is on pace to attain critical mass. The only problem is skipper error.

The old skipper is missing on a few details. Granted, when it's blowing 18-23 knots and several fleets are racing, his eyes should be on steering through traffic. Things happen quickly when the wind is 'fresh'.

In calmer situations, the old skipper will afford himself time to direct that the traveler will be pre-trimmed for the start so Das Boot will not start in de-powered mode. Also, that the grinding in of the mainsheet will commence before rounding the leeward mark.

Not executing these preparations results in painful de-acceleration for Das Boot. Had Trophy Wife been aboard, these sins of omission would not have been committed. 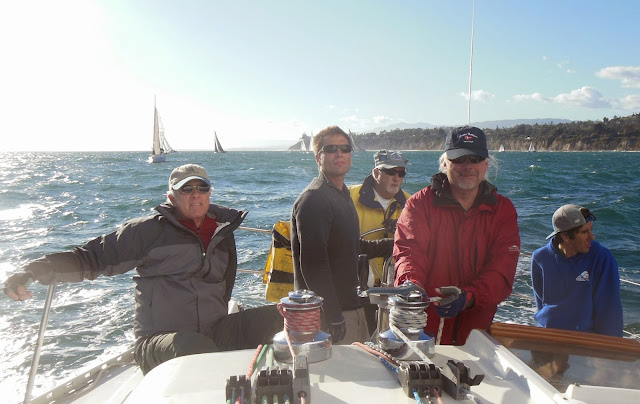 As a result we only beat half of what little of our Fleet that showed tonight. Exciting competition and exhilarating sail, nevertheless!
Posted by Doc Häagen-Dazs at 7:26 PM 2 comments: