To all my friends, sailing, non-sailing, and would-be sailing friends for the holidays and the coming year: Fair Winds & Following Seas!

Wherever your venue may be.

(That's a hint to click on the link provided!)
Posted by Doc Häagen-Dazs at 8:12 AM 4 comments:

It started as another one of those dreadful race days. If it weren't for there being a race you would never dream of going down to the harbor. To uncover your sails, anyway. Nothing but a big flat mirror outside of breakwater. Not having your full crew for another. Having a whole day of English Premier League soccer games saved on your teevee, for another.

I was late to the boat. Rookie-of-the-Year and friend had already uncovered Das Boot's sails. Still, I hesitated. We sat in the boat and discussed what other uses to which we could devote this sunny and warm Sunday. Suddenly, someone started the engine. (I guess that would be me.) Everyone sprang into action.

Leaving the harbor, we found a steady 6-7 knots blowing over a smooth sea. We timed our start in this pursuit race perfectly. Right on the port pin, maybe five seconds late. I immediately turned the helm over to Trophy Wife (TW), who is our light wind specialist (LWS). 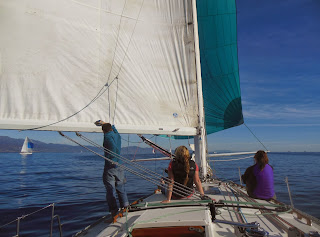 TW put Das Boot up to her best optimal performance possible (BOPP) in the day's adverse conditions. I made my own optimal contribution by just applying my ample beer muscle to the leeward rail.

Race Committee chose D-11, a course which I contrived years ago to (a) avoid the hideously boring triangle track regularly dealt to our fleet, (b) requiring two spinnaker sets, (c) setting up a rare downwind cluster finish under the colorful chutes.

Only today Das Boot found herself in few clusters. The Fleet spread itself over the sparkling surface, every crew trying to find and harness its own fresh, un-deflected wind.

We sailed smart. And had a lot of fun. It did not matter that we finished 11th out of 17. We had already evaded the biggest mistake possible today by raising sail.
Posted by Doc Häagen-Dazs at 8:42 PM 5 comments: