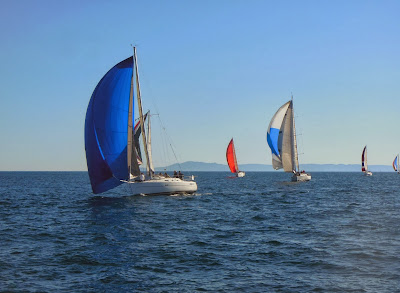 The day's race was supposed to be a delicious 10.6 nm circumnavigation of Oil Platform C, subject to wind conditions. Wind was at 6 knots, but steady, at the warning horn.

Despite the day's glorious sunshine, the race committee sadly elected to shorten course to another boring triangle race around the buoys. Dumbfounded, disappointed, and disgusted! That's what we were! The RC was obviously intent on shortening their duties. As for our prospects, we realized our agony at the back of the fleet would be also shortened. Nevertheless, light airs were offset by their steadiness and flat seas.

We had a perfect start but were predictably next to last at the weather mark. Mid-way, Mastman took the helm to the crew's delight. Spinnaker hoist & douse were flawless. In between, we benefited from guest helmsman (Catalina-30 owner fresh in from the East coast) and a guest spinnaker trimmer (M-2). Das Boot worked her way to the front end of the 2nd half of the fleet.

Given the day, a perfectly satisfactory result.
Posted by Doc Häagen-Dazs at 9:22 PM 7 comments: 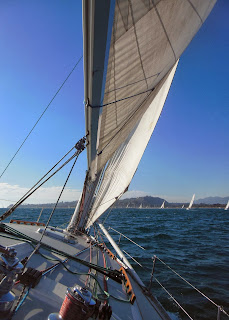 I can play all the excuse cards I dealt Das Boot today:
All-in-all an enjoyable day on the water. Especially for November.
Posted by Doc Häagen-Dazs at 8:25 PM 3 comments: 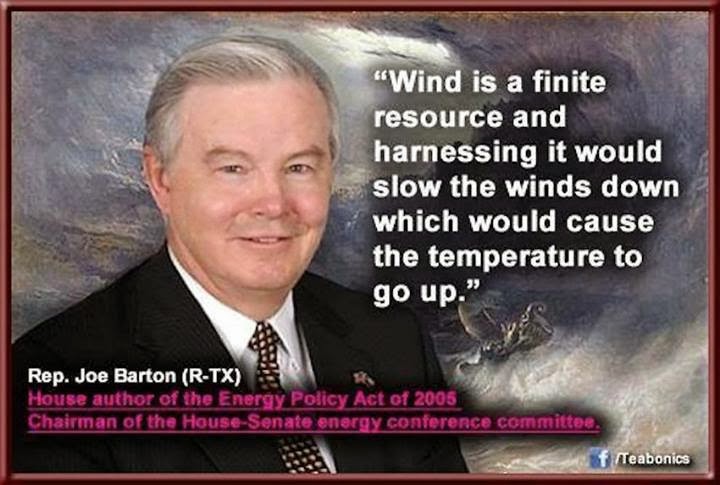 Santa Barbara Harbor from Kurt Raihn on Vimeo.
Posted by Doc Häagen-Dazs at 3:53 AM 1 comment: