After Tuesday, Even the Calendar Says, "W T F" 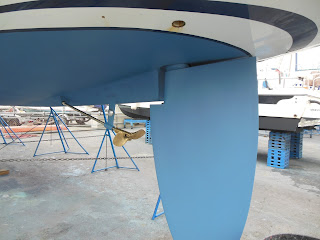 Das Boot has her prop back from MarTec and her second coat of bottom paint. She is going to splash today, mid-day. Diesel Guy has to then fine-tune the alignment of her shaft. Because, as I have learned, the hull changes shape once it's in the water. So maybe the newly re-tooled engine mounts have to be micro-adjusted for that. The first twilight beer can is tomorrow. I have two key members of my previous crew (they are pure gold) plus Trophy Wife (who's platinum). I've got a new recruit off the Club's classifieds: a  Frenchman. His plus is that he is a Ph D, so he parlez anglais. The negatives are he is leaving for the right-wing coast in June. Okay. At this stage I'll settle for a temp. But I'm still looking for a knowledgeable mainsheet trimmer to anchor the rear guard. Maybe that'll end up to  be me, if weather permits Trophy Wife to drive at the Leeward pin. I don't like the thin margin. If any of the above-mentioned pieces don't fall into place, I might have to scrub. Diesel Guy has to touch and give his blessing to the fooking engine or I'll be worrying about losing everything I have paid $,$$$ for in the yard. Whatever. Sometimes, to quote Tom Cruise, you just have to say, "W. T. F."
Posted by Doc Häagen-Dazs at 9:19 AM 10 comments: 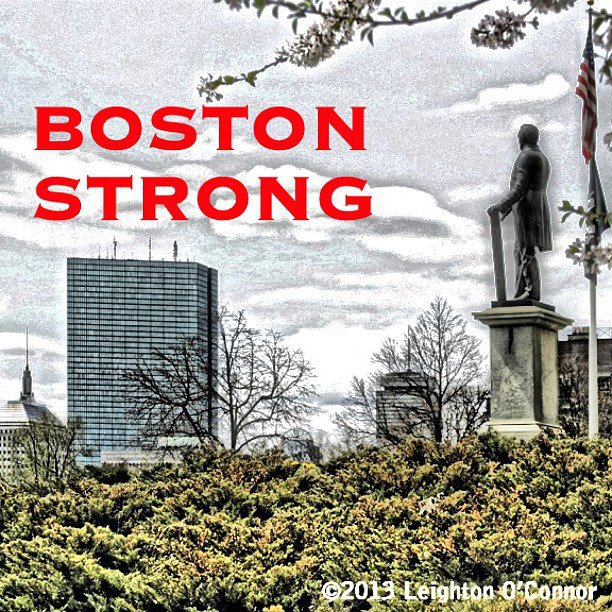 Last weekend we celebrated my MD Son's (oldest) 50th birthday. It was an all day and overnight event featuring a 10K bike ride, a Lido 14 boat race inside Long Beach's break water and a spectacular party. MD Son has his own Lido and arranged for five others so his three brothers and additional friends could race with him. Thankfully, Trophy Wife and I arrived too late for the bike ride, just in time to catch the fleet's return on film. . . . . 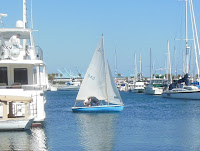 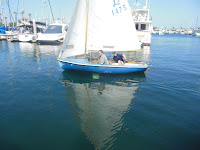 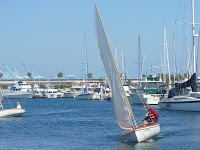 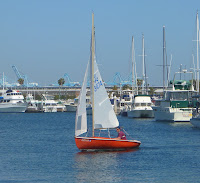 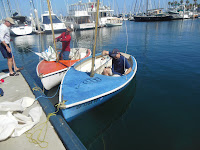 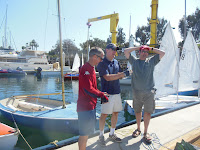 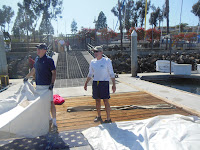 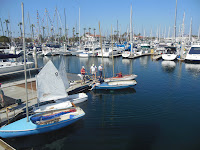 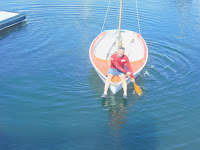 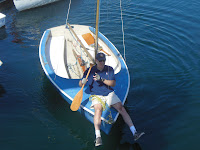 . . . and in plenty of time for a spectacular party (Lots of beautiful people)!

But the point of all of this is that Lido's are an instrumental part of my family's history. We didn't understand the importance of the event at the time, but it was kinda Trophy Wife's and my first date: a day sail, something like 44+ years ago, in Newport Beach. MD Son and TW's son were aboard.

Life is like that. In living everyday, we are not aware of epic, iconic moments until much later.
Posted by Doc Häagen-Dazs at 8:11 AM 6 comments:

There's no need to explain the title, except to say there's no baring of one's ass involved in this race.

Today was 6th running of a Race which I conceived and for which Trophy Wife and I commissioned a trophy . It's a 16.5 nm race. 95% of the times it's a windward-leeward up & down the coast race. Usually, it's a light wind nightmare for Das Boot. The miraculous year we won it and our own trophy, it was a building leeward-windward race.

This year, it reverted to form.  Unfortunately the Race Committee did not put much credence in the forecast of light wind (7 knots max) nor did it heed my recommendation to shorten the course at the start.

Consequently, 13 boats soon disappeared from each other in the gloaming.

Without Das Boot, I stationed myself midway up the course overlooking Hendrys Beach, where the turnaround would have  been for the shortened course. Instead of seeing the entire fleet as I anticipated, I could make out only four or five boats.

LOA figured large. The J-145 ultimately finished 1st and an hour or so lbefore the Beneteau 40.7. An hour later (it seemed) some J-70's finished. The remainder of the fleet was semi-visible on the horizon. 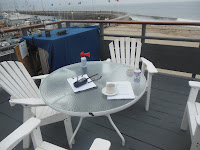 Many times the Race Committee abandoned their post in favor of the bar and the Masters Golf on teevee.

With the prospect that some boats would not finish by sundown, Doberwoman and I finally abandoned our vigil in favor of the Dodger game taped at home. This was a good race to have ducked.

I have the contented feeling of a victory. Of sorts.
Posted by Doc Häagen-Dazs at 9:20 PM 3 comments:

Not Fun: Watching a Yacht Race from Shore 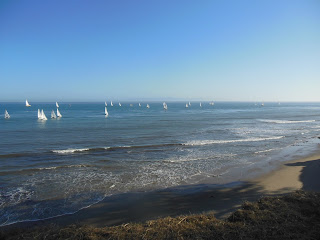 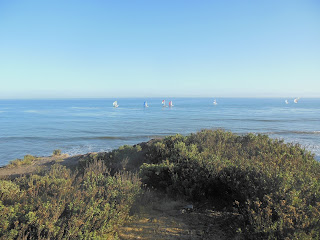 And without a good telephoto, you can't get good pictures either. All you get is a little more exercise and a little more canine company than you would usually get on a Wednesday afternoon.

In retrospect, it was either a bad idea or a very bad idea to put Das Boot on the market. Her diesel was working perfectly, until a couple of surveyors got their hands on it. Then they sicked a Diesel Guy on to her and there's been no end of diagnostics and prognostics as a result. Proctology and colorectal surgery. Seemingly endless.

Previously everything was working perfectly. Now she's on the hard and I'm missing races left and right.

Tillerman ("Die on your Laser") and my friend Dave ("This is a beautiful day") are right. My response to noticing my ageing process should have been to assign my eventual survivors the task of selling my boat. My response to all of them -- surveyors, brokers and mechanics alike -- should have been to paraphrase Charlton Heston: you can have Das Boot when you pry my cold dead hands from her wheel.

Well, patience. I'm not a 2nd Amendment kind of guy. I'm going to chill. Eventually, I will sell her. And I will sail her until I do.
Posted by Doc Häagen-Dazs at 9:14 PM 6 comments: 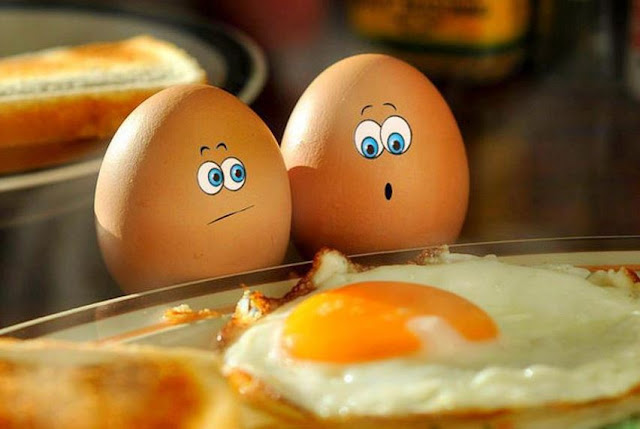 Wind came up to 15 knots just as people were getting to the harbor. I was happy to be among them as guest skipper on Bob Marley's boat.

As I have said before, this C&C is too complicated and physical for this old sailor. So I was just looking for something solid to hold on to for an hour or so.
Nothing like a wheel, hey?

Got a reasonable good start with 110 up. Fourth around the weather mark and we were holding our own down the next leg. The lads popped Bob Marley out of the sock and things got exciting. At the pin, Bob took over on the gibe. Marley blew off the topping lift to his pole and took our C&C way off course, sort of DDW. By the time Bob was put to bed, back in his sock, we were able to round the leeward mark in front of the second half of the fleet.

All I can say was it was fun going to weather. If we had gone with the 150 for the whole race, we must have done better. Don't have any idea how we corrected out. The marine layer rolled in as the racing ended and it got cold. My legs were cramped totally. I slammed some brewskies while we recovered the topping lift. Couldn't last long enough in the bar until the results were posted.
Posted by Doc Häagen-Dazs at 8:29 PM 2 comments: