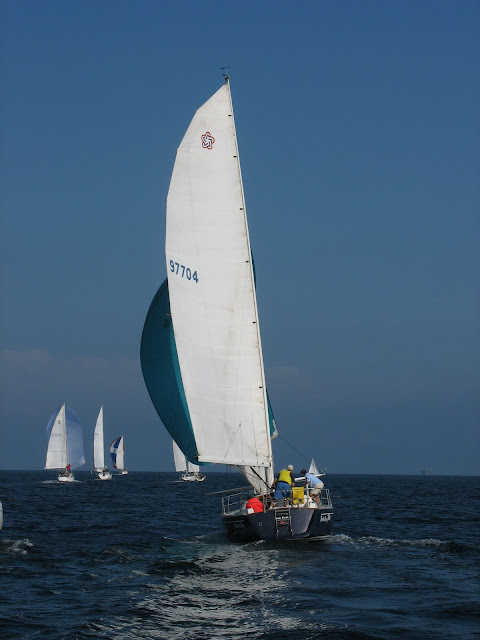 Psyché's Song thanks Brisa for our acquisition of this shot!
Posted by R W Rawles at 10:27 PM No comments: 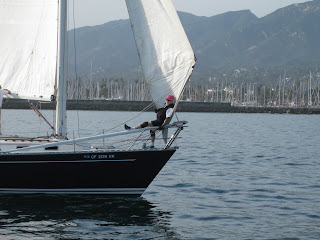 The Skipper's job of forcing the wing-and-wing set up looks like relaxation, but it is uncomfortable. It's not pretty, to be sure. Wing-and-wing did the job putting us to the front of the pack. MVP, navigated, JLR, steered wide of the mark until we could put up the spinnaker on the way back on the second and last leg of this shortened course.

This race was a classic situation for the momentum-assisted start: gunning the engine and shutting it down outside of the 4-minute limit; coasting to the line so as to cross with momentum. 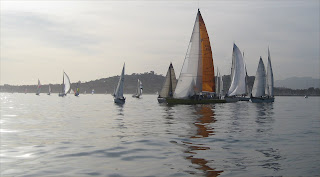 The only problem was instead of getting there late, we were early and had to round and thread through the starters who were are on starboard. But we go there with momentum. Once were moving in the sub 4-knot wind, we can rely on inertia of the lighter other boats to stop them. There they are, all parked together. We coasted against the current to post an unbelievable - for this wind 3rd Place!
Posted by R W Rawles at 8:32 PM No comments:

The Ides of March - Quiet Time

Putting away that bottle of hyperbolic acid this evening and picking up a little Botti. . . .
Botti, that's Chris Botti, 000000007
It's 0300 hrs Sozadee Time. The moon is reflecting off the breeze of the Channel into the ceiling of my study. Many who know me consider it insane to get up out of a warm bunk to

176,000 maniacs behind me in the Volvo Ocean Racing Game (VORG). 28,000 are at their keyboards at this moment. There is good company among the VORG lunatics.

Before I know it, I have bungled my rounding through micro-managing my helm. Hundreds of places have been lost in these three early morning hours. Like all other losses before them, I have to put them behind me. Scoldings from Trophy Wife for my sacrifice of sleep and risk of health are ahead of me.

Through it all - loss and gain - Botti's Emanuel will sustain me.
Posted by Doc Häagen-Dazs at 5:56 PM No comments: