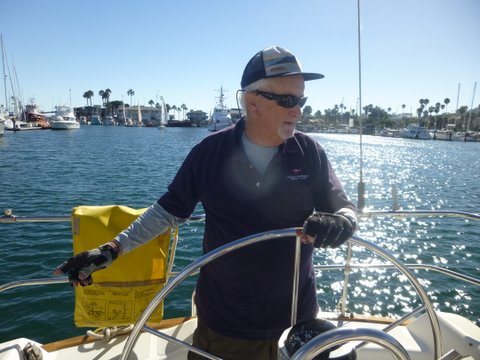 I was not looking forward to today's sailing. Lack of energy factored in. Also, I never look forward that much to sailing without Trophy Wife being aboard. But I took most of the day off from work and caught a good mid-day nap. That helped me get down to the harbor an hour earlier than I usually do. I staggered down to the slip, carrying ice in my backpack. The middling wind seemed overwhelming. Put the boat together with all deliberate speed. The crew arrived on time. So, off to the races we went. Without TW aboard, I could not feel relaxed at the helm.

The weather leg turned out to be exciting. Wind was steady, 13-16 knots. Das Boot started on starboard in clean air. 90 seconds after the gun, the Hunter ducked us on port. Fine, I thought. But inexplicably he flopped over into our bad air. The result was he trapped us into on long starboard tack, preventing us from tacking on to port side and going into the beach. Conditions were optimal for blasting through the kelp straits: high tide and a decent breeze.

Nevertheless, it was interesting: a number of close tacking situations with the C&C. At the weather mark we trapped the C&C and the Tri on the mark. The latter had to do a penalty turn and the former had to re-round the mark.

Then my mood changed: I was free from tactical stress & drama on the beat.  On the miraculous reaching legs, I reached for a beer and wondered who wouldn't want to go for a sail? Crew was delightful. The day was beautiful. What more could be asked for?

Then the wind dropped to 10 knots. Bob Marley caught up to us, but couldn't break through our overlap to leeward. A smooth tack at the leeward mark gave me confidence we could force Bob to tack out, away from the beach. When he did, I thought we had a chance to hold him off. But in the falling breeze, he caught us.

We finished in the middle of the fleet (Again!)

I skipped the bar and went home to TW and barbecued dinner.
Posted by Doc Häagen-Dazs at 8:30 PM 2 comments:

Life intercedes when you're making big plans. Yesterday we were planning to race with Rookie's brother and father as well as two Swedish friends of Mastman. Rookie's brother was supposed to be a V.E.S. (very experienced sailor). But I was only 50-50 on it until Spinnaker Maestro called and said he wasn't feeling all that well. That tipped the scales. Karma wasn't right.

After all, it was (only!) the day after TW's surgery. I wasn't ready to be away from her side, out of earshot, especially for a couple of hours or more. What was I thinking? If I had been on the water, I certainly would not have been thinking about boat tactics or sail trim.

So, what did I do instead? A little housework. A little scheming on my Rotisserie entry in our English Premier League fantasy group. A little shopping for our salmon dinner. A short walk on the soccer fields with Doberwoman.

No, I didn't want to take her along the shoreline where I could have had to watch my friends dueling it out on the water. They would have had a decent 13-16 knot breeze and a very easier time with it, too, without Das Boot to contend with.

Truth is, my right Achilles heel is out; my back is out; and even a walk down to our slip would have been a chore. Plus, we have an offer on Das Boot. It's not at all attractive enough to amount to an offer I can't afford to turn down. Or is it?
Posted by Doc Häagen-Dazs at 6:38 AM 2 comments:

Syncing-Up with my Taxi Squad

Of late, I've been unsure what I've been dealing with here. Maybe what I have is ½ crew and ½ taxi squad. As I understand it, a taxi squad are not really members of a (football) team but are lower-paid extras retained to fill out a roster for practice scrimmages. That sounds like the best way to describe our people.

Out of Das Boot's hard core, today we only had TW, Spinnaker Maestro, Rookie-of-the-Year, and Newman. These four are assuredly first stringers. Additionally, we had Rookie's mother along. Which was good. She handled the camera well and brought down the spinnaker into the sewer without a hitch or a tear. What more could one ask?

In today's pursuit race we started, maybe, seven seconds late. More important, we were right on the highly-favored, weather pin on port tack. In the 13-17 knot breeze, I took this advantage to sail out of the current, close to shore, tacking up the Kelp Straits. Right away I knew we were in a groove when we crossed our first starboard boat. On that first leg of this windward/leeward course we basically passed the entire fleet.

The crew, even if short-handed, was smooth as silk. And our chemistry was much improved. Newman and I are actually loosening up & getting along! We finished 3rd out of 17 boats. It was a beautiful sunny day with a steady breeze and flat seas.

Das Boot as Others See Her 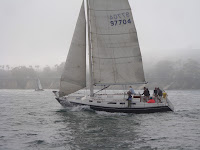 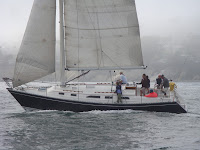 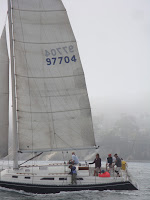 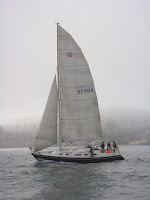 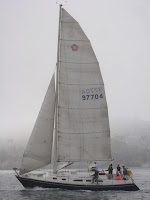 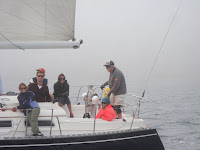 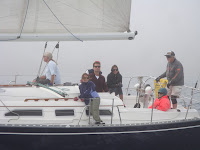 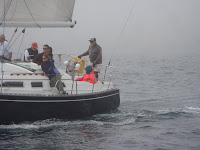 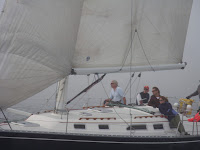 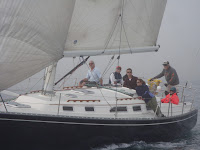 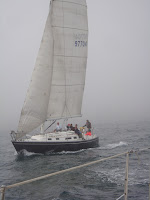 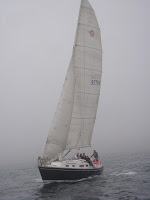 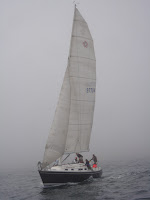 Posted by Doc Häagen-Dazs at 10:04 PM No comments:

Resumption of My Wednesday Afternoon Job 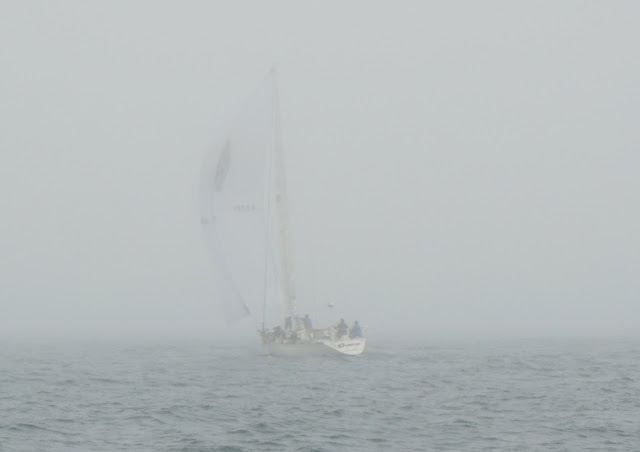 Once you think you have the hard core crew assembled on a day with perfect conditions, things would gel. But they didn't. The chemistry was missing. Maybe it was my unfamiliarity with sailing with Newman's GPS's VMG readings. Counter intuitive, they were. After years of arguing for VMG on deck they just amounted to a distraction from my seat-of-the-pants feel?

The wind was strong for maybe two-thirds of the weather leg. And then plummeted by half.

Boats passed us, one by one. Especially that lovely C&C under Bob Marley.

We corrected out to 10th out of 15. Not too different from where we finished, I'm guessing.

But the real bottom line is it was not a fun day. Not for me. I can fix my boat, but not myself it seems. Declining energy, physical conditioning. It's just trending to be too much even walking down the docks to get to Das Boot. Wednesday afternoons -- this one anyway -- what I really wanted was a longer nap with Doberwoman.
Posted by Doc Häagen-Dazs at 8:01 PM 5 comments: 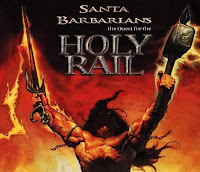 Posted by Doc Häagen-Dazs at 7:03 PM No comments:

Newman and His VMG

Today the missing man finally showed up. We were missing someone knowledgeable to challenge my boat handling, sail trim, and tactics. Equally important, someone who can take a leg or two at the helm so that I can tip my ancient feet up and a cold beer down. In addition, New Man believes in the application of GPS to derive Velocity Made Good (VMG). Which I have never been able to turn/coerce past crews on to! I have always argued that only VMG can arbitrate all on-board

disputes pertaining to DDW and pointing vs footing. Today, I was even delighted to lose a couple of debates to Newman and his VMG.

But those losses are acceptable on a day when your team loses to just one other boat on the water.
I can take it.
Posted by Doc Häagen-Dazs at 9:01 PM 7 comments: