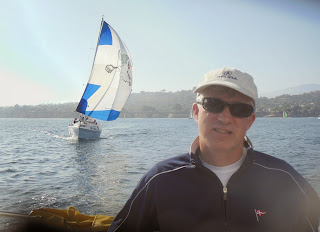 Weather was as predicted, unfortunately. Dead-on a 8 knots. Once I saw 10 knots. Port start on port end was highly favored. I argued for it, but Trophy Wife vetoed it. For good reason: with a 1-cylinder breeze in a fleet of 15 hulls, Das Boot's displacement would have made her a sitting duck. Or worse!

Nevertheless I got a creditable start down the line, tacked to port. At low tide, in addition to low wind, I didn't want to venture in to the beach. We tacked up the course and rounded K-Mark well behind most of the lighter boats. My son, (having taken off from work and having driven for a couple of hours,) was a last minute guest-skipper. He drove for the last two legs.

That's what really made our day.
Posted by Doc Häagen-Dazs at 9:03 PM 6 comments:

A near-perfect day. 17 -22 knots, steady. A 6-nautical mile, windward-leeward pursuit race (our favorite). Missing only one of the hard core crew.

Hit the line at full speed less than 10 seconds late. Elected to take Kelp Island to port, even though the tide was out. After navigating the straits, we found our selves in intense tacking duels, close crossings. All that good stuff.

After rounding the weather mark and getting the chute up, we relaxed and looked around. Only a well-sailed Catalina-34 was ahead of us. But they were well-ahead. 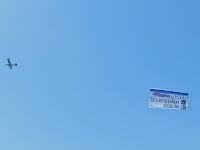 Cameras appeared. Beers were popped, and I left the helm to grab one (or two).

In the end, we closed on the Catalina and made a race out of it. But this one got away. The Kid, who trimmed our spinnaker, collected a 2nd place glass.

Okay. Let's get this over ASAP. We I were was over early.

Nothing wrong with Trophy Wife's count-down. My mind was lost in the traffic on the starting line and I stopped listening to her, I guess. (Her complaint on shore, too!) At the last minute, I ducked down because I had a lot of water. But came back up. I figured that as long as I was further back than the Beneteau, we'de be okay. Trouble was he was OCS, too.

Second skipper mistake: we were missing Mastman who is usually in the companion way, listening for the all-clear call on the VHF. I forgot (!) to detail someone else to do that. 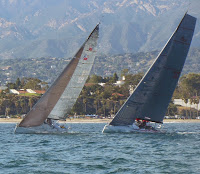 We had completed one tack after the start before someone heard the race committee's hail that we had still not exonerated ourselves. Big mistake. The same with the Beneteau.

So we re-started behind another fleet and spent the evening sailing among other fleets. Plenty of opportunity for me to shed my competitive skin. In a steady 15 knot breeze, I elected to pleasure every one with a pleasant day sail around the course. 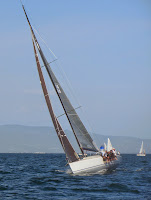 Everyone, except The Kid, had a leg at the helm. I had plenty of opportunity to photograph. Trouble was, there were none of our Fleet's boats within range!

Went home. Got the mail. And Doberwoman, who had scored her 3rd and 4th skunk kills (confirmed) this month got full-facedly skunked by one who got away. Completing a perfect, if negative, hat-trick for the day.
Posted by Doc Häagen-Dazs at 9:43 PM 2 comments:

It was so hot, I was tempted to leave the front door open to cool the house while we went sailing. Out of prudence, I closed and locked up. Which meant that Doberwoman deserted her post and retreated to cool off in the back yard.

This evening's twilight race was notable in many regards. Trophy Wife returned from the injury list and served her role as time-keeper and nagivator-of-details (both my glaring weaknesses). This was our first of three races without Mastman who is in Spain where the rain is mainly in the plains. In his place, we subbed a 14-year old kid (!), 200lbs (!), and 6 ft tall (!) off the docks! Kid had been kicked off a competitor's crew because a sailor didn't want any one onboard who didn't drink beer! I had a lot of initial trepidation, but Kid owns his own skiff, and is all into sailing. I was relieved that he takes instruction! Kid may be a keeper. I found a coke in the cooler for him.

Instead of the 10-16 knots predicted, Mother Nature provided 16-21 knots, wall-to-wall. 16 boats showed up to a starting line that was highly, highly favored on the starboard end. 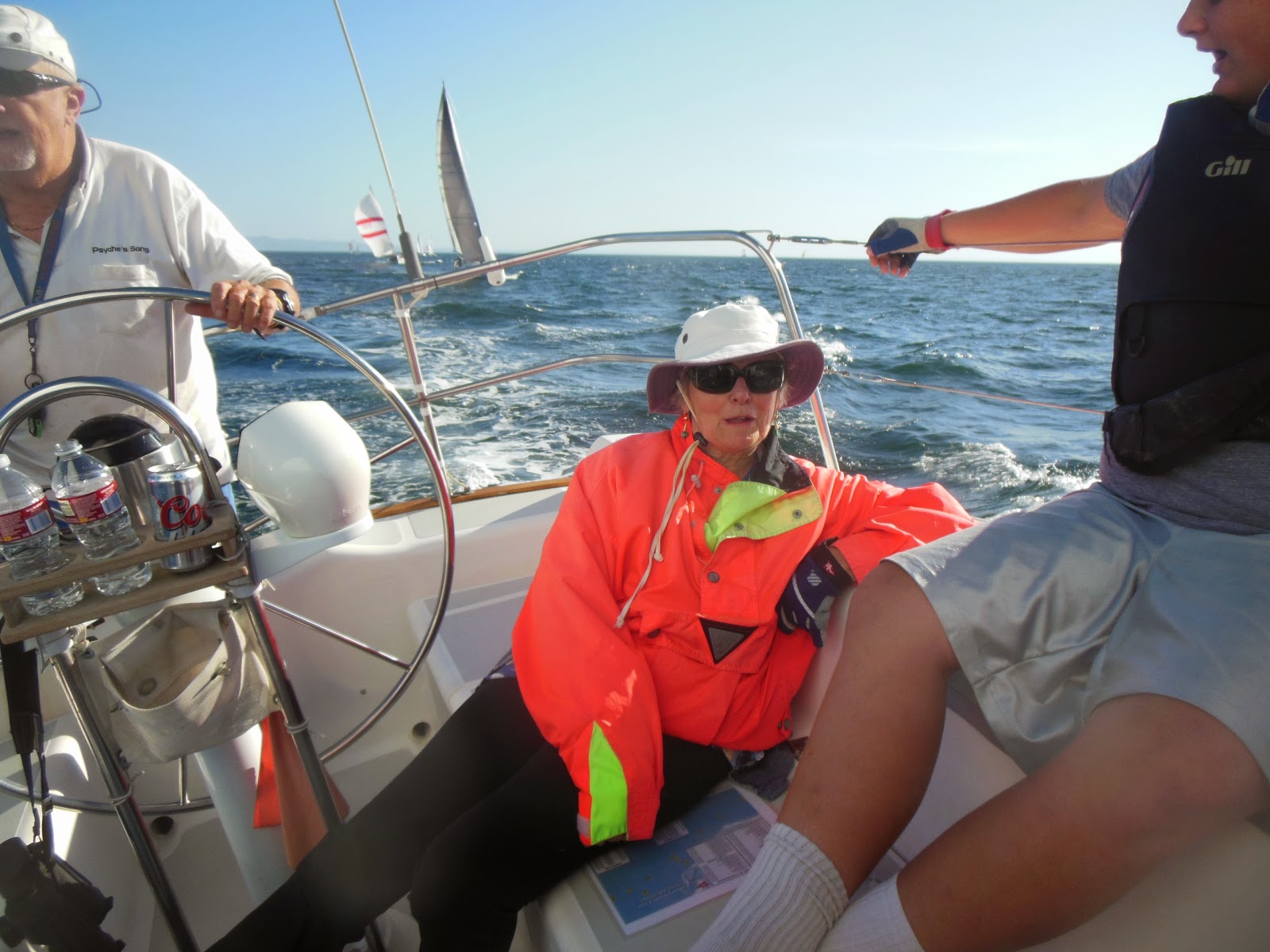 As always, my strategic approach is not to attempt the perfect start but a good-enough start. With less than 60 seconds, I saw the Beneteau 40 deep, approaching to shave off bargers. He was the one going to get the perfect start. We waited on the flanks for the right moment to jump in and we were good enough. Two or three bargers were shaved off at the pin and we were able to immediately flip on port for a tack to the beach. A dynamite start! Completely alone we tacked back on to starboard and sailed over the kelp bed un-molested. We were trucking.

No mistakes were made throughout. Somehow we sustained a severe tear in a spinnaker panel. I expected the chute to blow up any minute, but she held up. Better than I, who had to be relieved off the helm for much of the final leg. 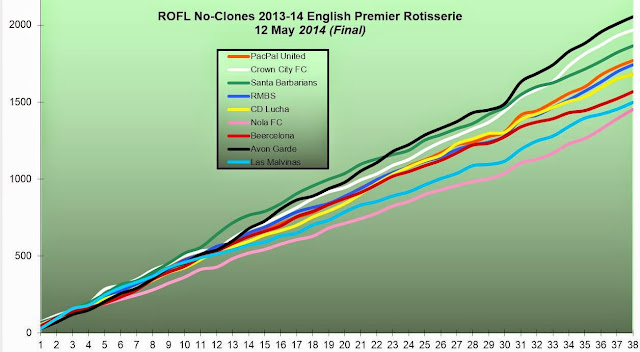 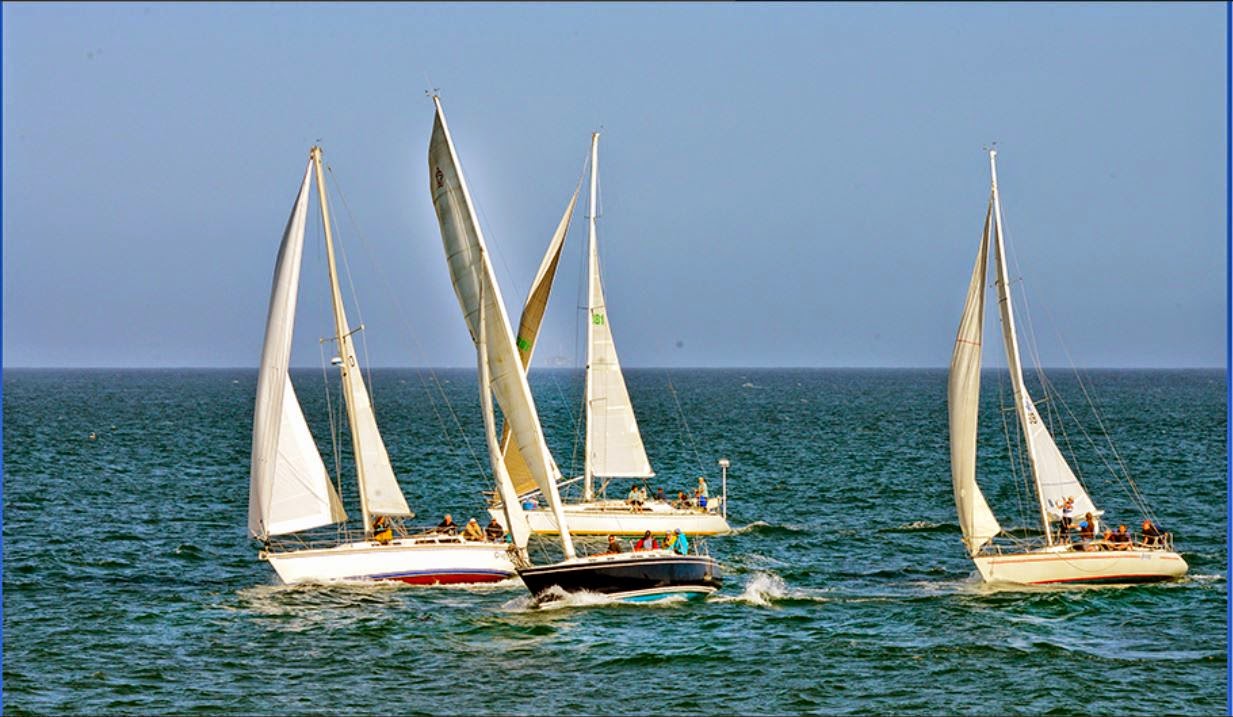 Just when I'm thinking off getting the burdens of yacht ownership lifted from my shoulders, along comes a beautiful 6nm evening sail. 18 to 22 knots at the start, which held steady for the first two legs.

We were slow at the start, because I had the wrong man or the wrong instructions on the main sheet trimmer. (Details again!) When we tacked for the line we didn't have the main sheet strapped in tight. And that doesn't come easy when you have 20 knots over the rail.

Nevertheless, we were good enough that boats seeking an early tack to port had to duck us. Exciting & sustained 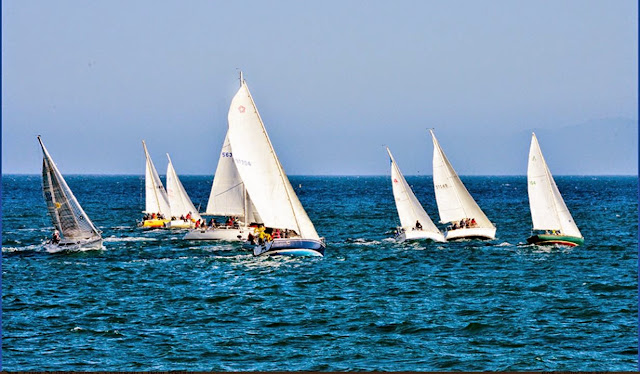 tacking duels in rolling seas followed throughout leg to weather.

The reaching leg was uneventful except for the fantastic rides we were getting on the rollers. Just at the reaching pin, as we were thinking of gybing, we had an involuntary gybe and went with it. Rounding the mark, we dropped our chute.

We discovered the wind had shifted 150 degrees and we were going to have to tack to fetch what was originally the leeward mark! Wind from that vector was 7 knots, but building. Two boats we thought we had buried screamed by us with their huge genoas.

When we rounded it, we raised the chute. Or should have. For whatever reason it was impossibly snagged and had to be brought down again to straighten out. We were able to fly it for only half of the last leg. We finished in the 1st half of the fleet but corrected out to only 7th out of ten.

All sailors agreed that it was a unique and interesting sail.

Spring Series Ends with a Whimper

The day gave us 1.4 to 7 knots variable, all from the south. Seas were rolling. Current? It was confused to say the best. The race committee offered us a 4.9nm buoy race instead of the 10.9 nm oil platform normally scheduled for the final race of the Spring Series. ⅔ of our regular 6-person crew (sans Trophy Wife) were missing and filled in with two guests. 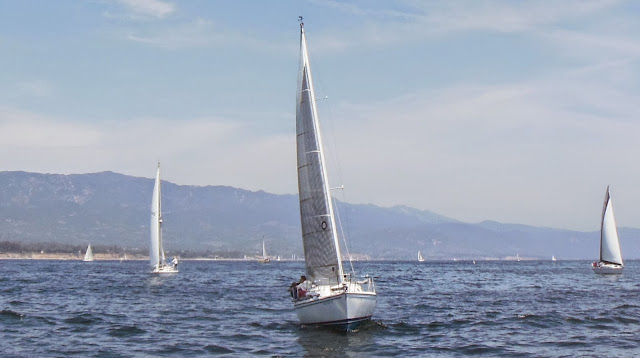 Under these circumstances with a highly favored port tack starting line, we achieved an optimal start. As always I elected to just avoid other fast accelerating boats in order to start exactly at the pin. More than half way up the weather leg we surprisingly found ourselves ahead of more than half of the fleet. Then, maneuvering in the vicinity of the mark and when we needed it the most, the wind 'dropped' to 1.4 knots. I had no option other than over-standing and then gibing on to the starboard tack for the next leg.

It was a significant consolation for us to be able to drop the useless jib in favor of the spinnaker, which we were able to carry for the final three legs! We finished, once again, in the middle of the fleet. 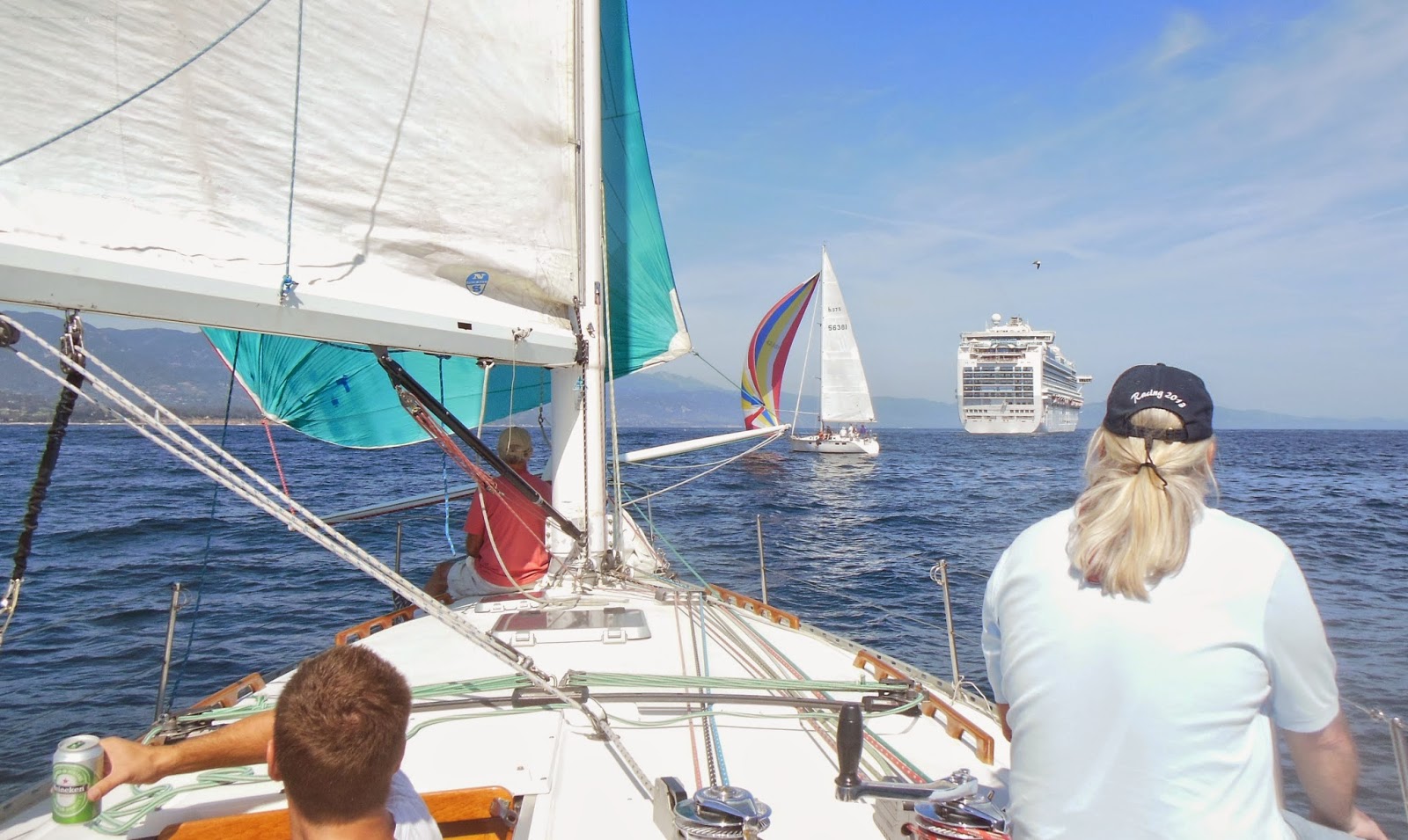 For me, the high point of the day came earlier, watching 3rd place Chelsea, at home, fail to score against 18th place Norwich. Unlike the sailing, the Premier League football was exciting. And, by the end of the day, I could even feel the home team's pain.
Posted by Doc Häagen-Dazs at 10:54 PM 3 comments: