Light air day. 2-5 knots for the entire race. Used a bold but risky barging start because the boat with the right-of-way had no leeway.

I said, "If you luff up, we will respond!" By which I meant, you can push us up over the line if you want to.

"Barging!" was the response.

"You are the barge!" was a comment whispered by one of my crew, thankfully barely audible on board.

I responded, "But you're not moving!" What did she expect of me to do? Sail to leeward of a stationary, 40-foot wind shadow?

We are always more short-handed in a light air day. I had to do a little spinnaker hoisting at the mast and provide a little leeward rail ballast while Trophy Wife helmed. She did well: 11th out of 19 in the 3-mile race. That's why she is our light wind specialist.

In the process, I started working on a new spin about my age: tolerating it and not feeling so guilty about not being able to do everything on my boat, like I used to be able -- nice as that would be if I were be able to find an alternative & affordable boat.

Instead, I began recalling that 20 years ago, or more, I was extremely aggressive and springing-to when crewing on other people's boats. So, currently I am only asking of others what I have before so freely given myself. I did my time and would do it again if able. I have done my time before the mast.
Posted by Doc Häagen-Dazs at 8:16 PM 2 comments: 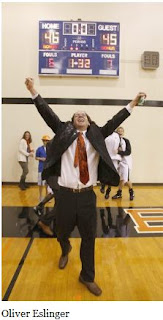 Why is Trophy Wife bringing the front page of the Los Angeles Times in to me this morning? So I asked myself And why is the day's column by my favorite sports writer, Bill Plaschke, filling up the left hand column on the front page?

Well, it didn't turn out to be about civil war in Lybia, revolution in Egypt, nation-building in Quicksandistan, or the dictatorship of the Corporariat in Madison. It was about a egghead college basketball team winning its first league game in more than a quarter century.

In the closing minutes on Tuesday, Caltech scored a 46-45 victory over Occidental. The last league victory for Caltech in the Southern California Intercollegiate Athletic Conference was on Jan. 23, 1985. As Plaschke does the math for us, that before any players on the current team were even born.

There were other historical firsts that night. For example, when's the last time anyone heard of dumping a jumbo cooler of ice cold Gatorade over a coach's head on an immaculate indoor basketball court?

Plaschke writes that during that span of 25-plus years,

Caltech brains have been able to change the world, yet they couldn't figure out how to win a basketball game against any of their seven SCIAC opponents representing 10 local NCAA Division III schools.

Never in a million years, it seemed, could Caltech win a conference basketball game. With no cheerleaders, no pep band, and often no hope, Caltech's players have spent much of the last 26 years fighting solitary failure.

Some years, the team had players who never even played high school basketball. Some days, those players would fall asleep in practice after pulling all-night studying sessions. During at least one game several years ago, I witnessed a Caltech player doing his homework on the bench.

Yet the school has never dropped the sport because officials believe the struggles have served as an important part of an athlete's education. Before leaving campus to solve some of the world's mysteries, a Caltech men's basketball player is uniquely equipped to deal with the ones he cannot.

Think about that for a moment, Dear Reader, before clicking on to read Plaschke's original in full.
Posted by Doc Häagen-Dazs at 7:39 PM 2 comments: 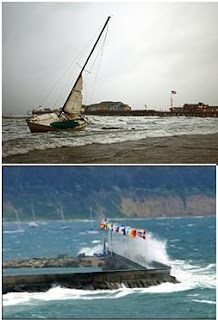 Last night a live-aboard friend FB-ed me about checking my lines - twice. I went down there in the rain and the wind and the surging harbor. He said in a dozen years oh his boat, this is the worst he's seen it. I've seen it worse. But last night, on my finger, the dock felt like the deck of my boat when underway.

With the help of the harbor patrol my friend had laid on extra lines on both boats. I still found a couple of improvements to make. On my way back a guy rescuing a wayward dinghy fell in. It was so cold he, like, bounced back on the dock.

I'm not sure I should be posting this now, because I haven't yet seen the 3rd act. After the early morning sun (no rainbow!) the dark gray ugly meany is back, and this time with a little thunder and lightening. So I wanted to post this before I lost my Internet.

If I can find a semi-dry interlude, I'll try a dash down to dockside for a check. All my wet clothes are on the boat! This time I'll remember my sailing duds.

I just hope that bow painter around the piling holds....
Posted by Doc Häagen-Dazs at 2:03 PM 8 comments:

You Don't Get This in American (Pointy) Football 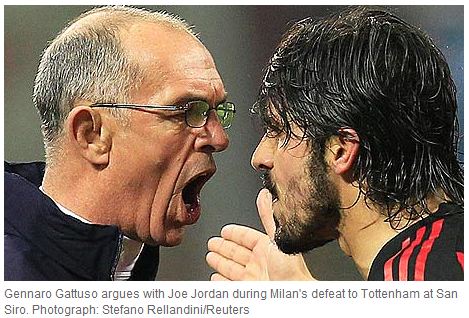 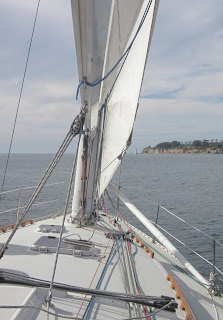 Our 2011 season began with 22 boats on the line for a race in 6-9 knots. We scrubbed the boat out for a couple of hours and ran the engine on Saturday. On Sunday, the diesel started on the 2nd punch, which was a positive sign.

With the hard core of the Good Guys on board, I was, maybe six or seven minutes late to the start. It's always harder, I think, to nail the start in a pursuit race. Ironic, perhaps.

Nothing much noteworthy: In low tide I elected to cheat on the right side of the course close to the kelp and picked some up, probably on the prop. Matt, with his shirt off, went aft on the swim platform and fished at it (unsuccessfully). While he was down there I missed tagging the weather mark by mere inches.

On all points of sail, the crew work was flawless. Moderately light airs and the kelp conspired to force us to settle for 12th place. 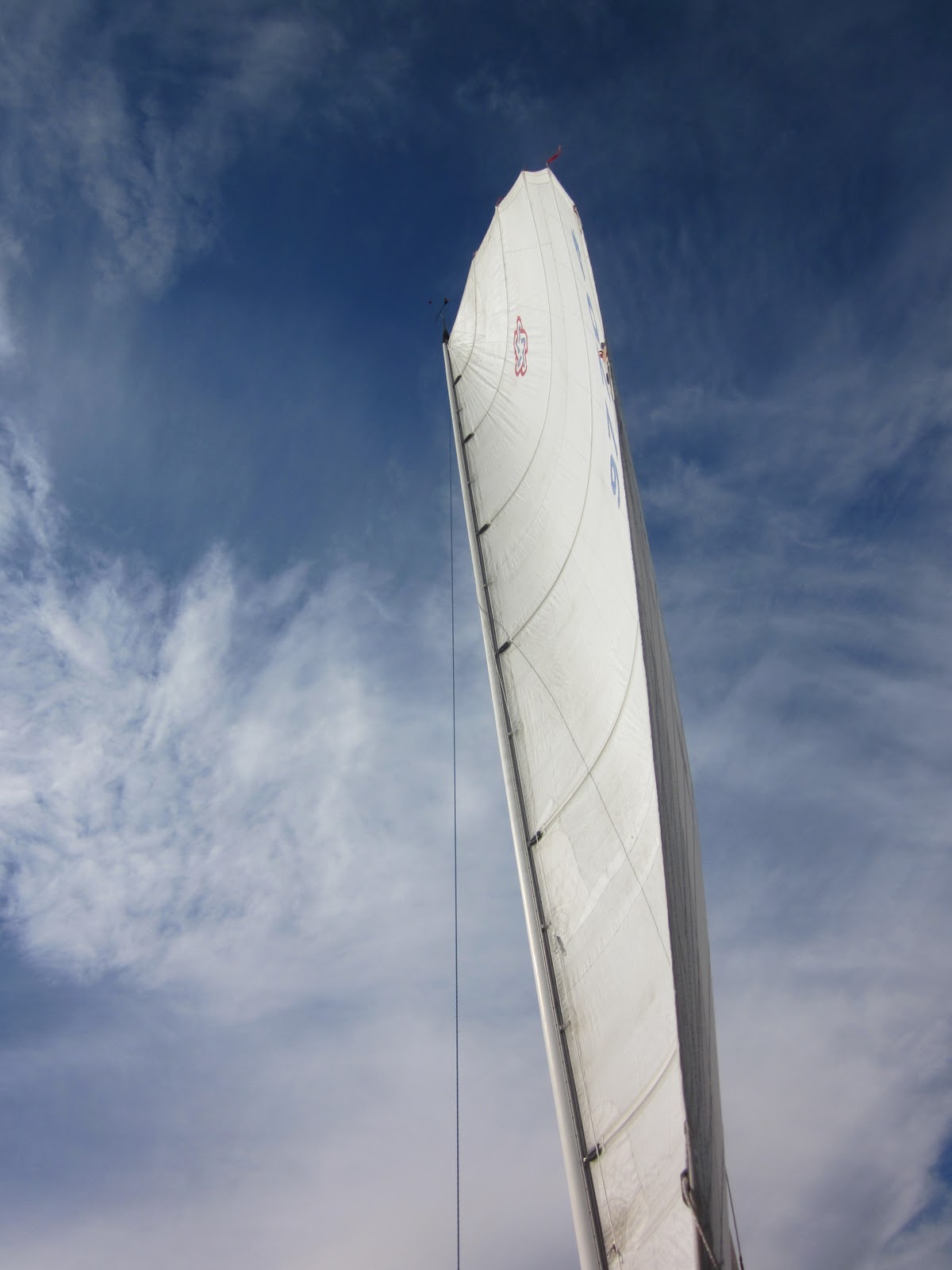 I'll settle for that.
Posted by Doc Häagen-Dazs at 7:23 AM 4 comments:

Visit msnbc.com for breaking news, world news, and news about the economy 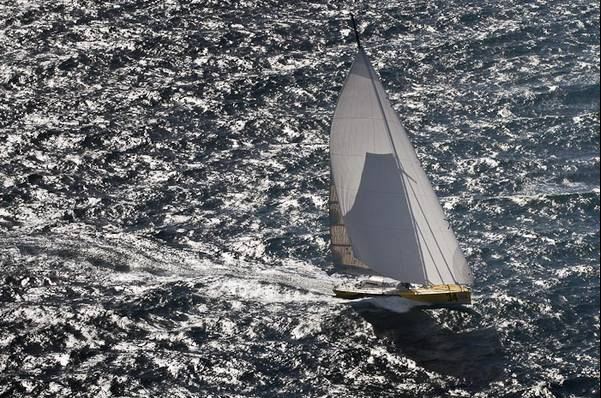 The 6,000 nautical mile leg from Wellington, New Zealand, to Punta del Este in Uruguay will see the four ocean racers head deeper into the Southern Ocean than they have been yet. Along the way the skippers will face waves up to 30 metres tall and winds that will consistently blow between 25 and 40 knots and often more. They will also pass Point Nemo, 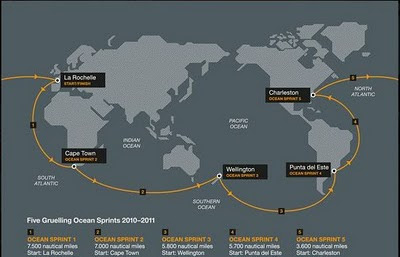 the most remote spot in the world, more than 2,000 nautical miles from land in every direction. After surviving all the Southern Ocean can throw at them they must round Cape Horn, one of the most dangerous bodies of water in the world, where millions of tonnes of water are forced through a 400-mile wide gap between the South American continent and Antarctica.

Ocean sprint three is arguably the most dangerous leg of the VELUX 5 OCEANS. Numerous sailors have had their races ended trying to pass through this section of the Southern Ocean. Some lost their lives.

Hopefully, I won't. I'll be dry (not sober), warm and well-rested behind my keyboard, racing my virtual yacht,
Open Container III.

It's not the only way to sail single-handed, but the best way at my age!


Update in the evening of Tuesday (PST), February 8 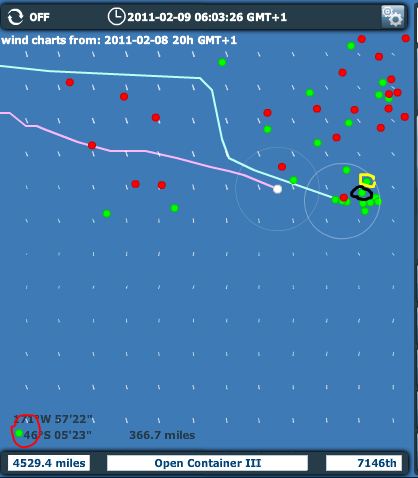 Not a pretty picture for the home team.

In 7146th place, Open Container III has the purple track here, and she is following in Belladonna's lime green wake in 871st place.

Paula, in No Going Back (2181st) is way south, circled in red in the lower left-hand corner.

Contiguous (764th) is circled in yellow.

To C's starboard, circled in black is Companion (597th).

Gerry and Vlad have asked not to have their position publicized. 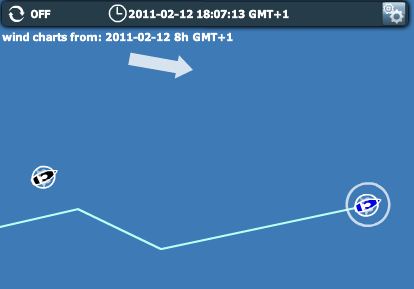 To get a handle on scale of this chart. Paula is 523.2 miles from me.
Our heroes:

There are 28 miles between them.

None of the rest of us can get in their picture.

Belladonna is 146 miles ahead of me! 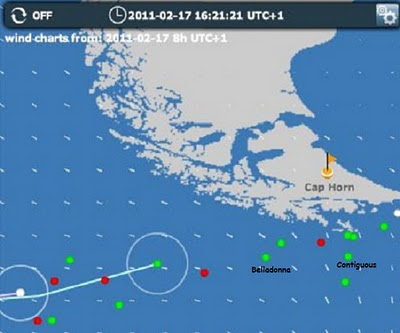 And, hats off to Belladonna who has stock sails & electronics.

The wakes of two boats are shown to the right.

Paula in No Going Back leads my Open Container by 141 miles.

Belladonna is 216 miles ahead of me.

Contiguous is 260 miles ahead.

My question is WTF is the finish line for this lamentable leg??? 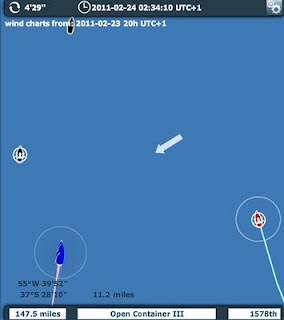 Open Container has clearly lost out to No Going Back (red boat 9 miles ahead) and Belladonna (black boat 23 miles ahead).

Belladonna is about 125 miles short of finishing at Punta del Esta and presently packing it in at 10 knots.

I have been justly punished for my myriad lapses and haphazard navigating. I have again failed to score under 1,000.

That's not taking away anything from the competitive sailing of those who beat me. I'm not at all confident I'll be able to beat any of my friends in the next lap. So I'm not about to talk smack at this stage.

I'll look back on this thread with bitter/sweet memories.
Posted by Doc Häagen-Dazs at 5:30 PM 103 comments: 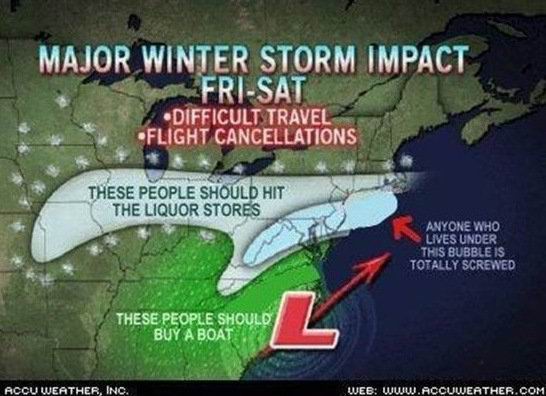