My routine of "Wet Wednesday" beer can races from March through October may be drawing to a close. If we succeed in doing what we propose to do, selling Das Boot, it could conceivably mark the end of all our racing. That's assuming we can't afford an age-appropriate replacement speedster. And that's assuming we can't hustle a regular berth on OPB.

So, maybe I should see what it's like to be a spectator. Hmmm. This afternoon I lasted about 3½ minutes. Then I went home to fetch Doberwoman for a walk on the beach below the cliffs. It was a short walk because the tide was in. But, at least it was participatory. I'm not much of a spectator. And yacht racing is not what you would call a captivating spectator sport. I don't know. . . . Something to think about . . . .
Posted by Doc Häagen-Dazs at 10:03 PM 7 comments:

I don't have no respect for restorations of large yachting relics of the past. I'm not speaking of old power boats. If someone wants to maintain old launches, tugs, trawlers or even cabin cruisers, either as live-aboarders or charming tour boats, that's one thing.

But to see old sailing yachts restored to the point that they are buoyant on salt water is another thing.

I see them on the bay occasionally. Usually they appear as visiting  vessels serving as tourist attractions. To me, they can't offer much in way of instruction as to how they sailed in days of old. In any kind of breeze, I would worry about safety of land-lubbers aboard; out in less breezes, they require engines running to get them up to any performance, much less tacking. What does that prove? Pure and simple, I regard them as wasteful of slips & dock space. Which are scarce enough as it is. Put these maritime relics safely ashore on the hard or in some maritime museum is what I say.

Too Much Good Stuff!!

The wind: it has been too good to last. Sunday morning promised another warm & windy day. Driving down to the harbor was disquieting, however. While the water was not exactly flat, it appeared subdued. But we were optimistic having invested two hours on Saturday re-adjusting our telescoping jib boom to where we could get a reasonable outhaul. And we were seven aboard (ideal) despite the absence of Mainsheet Trimmer who was sailing his own boat.

The wind was southerly and soft. RC called for a course which would have been a windward-leeward if the winds had been normally more westerly. But we liked their selection because it promised an easy shortening, although it is awkward to shorten pursuit races. We liked it for another reason: It was a reach-reach course. Actually, Das Boot was able to complete the 3-legged course with only one tack and 1½ spinnaker reaches. In 2-6 knots we were doing surprisingly well, hoping for a glass even. Just 100 yards short of the line, however, the wind spigot shut off considerably and we lost two or three boats. We finished 10th out of 16 boats - what we deserve for complaining of always finishing 3rd!

16-19 knots steady with a modest roll.  The lads were working on jerry-rigging the telescoping jib boom which had collapsed on us. Finally we were set with less than a minute to start. I had luffed over toward the beach to get out of traffic and somewhat out of the chop for the repairs to be facilitated. I had prepared myself to return to the slip or sail without the jib. But finally, we were raring to go and we reached off to the pin with less than 20 seconds to go and hit the line in clear air at hull speed. Not that bad start! We had all the freedom to tack off to port and took it when we felt it was optimal. Tacked up through the beach-kelp straits, virtually all by ourselves. Actually, there was one boat which we shafted with a lee bow. After rounding to weather we were 4th in the parade and corrected out to 3rd. Spinnaker Man provided champagne as we celebrated in the slip. What a team we have! I love this crew! I just frickin' wish I had a working camera!
Posted by Doc Häagen-Dazs at 8:01 PM 1 comment:

And Now Time for Something Somewhat Different

For one thing, the Guided 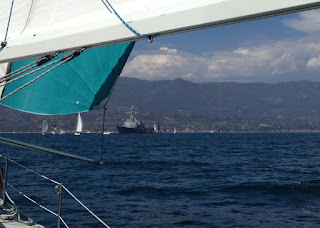 missile destroyer USS Halsey was in port, anchored right in the middle of our inshore around-the-buoys race course. A novel 500 ft obstacle. Plus, if you count the anchor line. Every 45 minutes a shore boat would off-load a bunch of civilians for a tour of the ship. Unlike visiting air craft carriers, which mark off the perimeter unauthorized navigation surrounding the anchored ship with patrol boats, the Halsey crew appeared to be relaxed. So those of us racing on Das Boot theorized that  we could cut it as close as possible on the windward side for maximal advantage.

The local press had summarized the armament aboard as including 5-inch 64-caliber gun on the front deck and the Close-In Weapon System (CIWS) on the back deck which fires 3,000 to 4,500 rounds per minute. 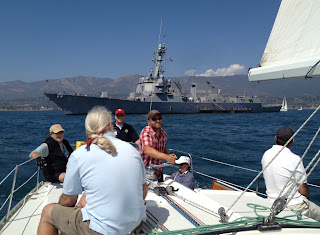 Why wouldn't they be relaxed? OTOH, I wondered out loud, what would be a more perfect cover for al Qaeda than a local regatta?

Which is what we had today: the annual Charity Regatta raises $$$ in six digits every year. Donors are invited aboard spectator boats and racing yachts. This year, Das Boot hosted a CHP officer and his 16-year old son. The weather was perfect and the winds were adequate, somewhat, to all us to squeeze through the straits between kelp and shore. A-Team was fully assembled and sail-handling flawless. Our two visitors were awarded prizes for Das Boot's 3rd place (out of 18 boats) which included shirts and a large tote bag!

A fun but exhausting day.

On her 75th Birthday, She Sails into 3rd place?

There's got to be a story behind this.

It starts with the fact that the skies were overcast with the hint of rain. As is the case in these conditions, rare on the Central Coast in the summer, wind and water is likely to be fairly flat. Tonight it was instable. Wind on the water looked like a crazy quilt or a chess board. Winds varied from 6 knots to 15.

After an abysmal start, I handed the helm over to our Light Wind Specialist. Trophy Wife applied all the wisdom and instincts she acquired in her vast experience as a lake sailor. Das Boot was skillfully and timely routed away from the light waters and into the dark water squares.

Thus, was a 3rd place finish snatched from the jaws of DFL!
Posted by Doc Häagen-Dazs at 9:13 PM 2 comments:

Too busy to take any photos! But 18-19 Knots, steady. Top recorded speed 8.4 knots. Great Crew chemistry (including good ol' friend picked up on breakwater)! Great beer. Great party. Greatest of all: two granddaughters racing on two different boats, both of which trophied. What could be better?
Posted by Doc Häagen-Dazs at 8:42 PM 2 comments: