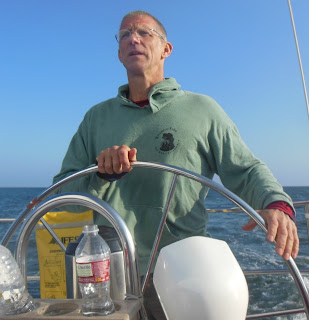 A Week short of a year ago, I wrote that it "Dudn't Get Much Better than This". But tonight, it did. The wind came, topping out at 21 knots, apparent. My son and his father-in-law came along. And, creme de la creme, two of my grand kids, ages 5 & 7. They came on board.

At the dock, I was more alarmed than shocked. Am I being irresponsible? My Crew of Irregulars taking my pride & joy to sea? But these two tykes were veteran white-water rafters, and did they know how to follow orders from their dad! Nevertheless, I was major league distracted.

Very distracted, in fact. At the start, I pushed the habitual bargers up a little only to find that I maybe had 30 seconds of time left with only 15 seconds of water between me and the pin. Plus, Das Boot herself, was being pushed up. I started early, over the other boat and dipped down, finding just a teeniest bit of water to do so. Not enough, I was thinking at the time. Just short of fouling leeward boats, I turned back to the line and put the pedal to the floor. "Was I over early?" I was asking over and over.

The Race Committee displayed the Code X (Individual Recall) flag, but we could not hear anything on our VHF. Then we saw the Hunter turn back to the line. The crew wouldn't let me think about doing the same. "Go for it, Dammit!"

Sometimes you just have to say, W.T.F. We never looked back. At least I never did. We were second or third to the weather mark. We had an unbelievable fine spinnaker set after a brief delay. People who had sailed before on Das Boot, but never together, worked with unbelievable teamwork. I felt the pressure of the Hunter's pressure close astern on the last leg. But relaxed when they tacked off from our bad air. The only flaw -- a small one -- is we didn't hear the audible as we crossed the finish line. But at that point we didn't care much if we weren't accorded an official start or a finish. It had been that fine of a day.

In the bar, we checked the board. We had corrected out to first place out of 17.

Instead we took Das Boot out for a mid-day memorial cruise at friends' request. Their grand parents requested to be buried off their favorite beach with their ashes scattered at sea. They didn't die together. The surviving spouse honored a request by his partner not to have her ashes scattered apart from his. He may have lived a few years longer. I don't know. Their details were not important to me. But I get their idea. Sweet.
Posted by Doc Häagen-Dazs at 3:24 PM 2 comments:

"Fun Race" is what they call it when a race is scheduled between two of the three twilight beer-can series in the summer.
It's supposed to be fun in that it doesn't effect any series score. And it's an excuse for the R.C. to pull something "funny" like down-wind starts. In 15 to 17 knots of wind. Doing that with Lasers is one thing. Even with me feeling like I had control of Das Boot as if it were a Laser-38! Like I used to.

But I am still in my mid-summer transition stage with a revolving-door crew of irregulars in training. Couldn't get the chute organized quickly enough to justify confidence in getting it down. By the time we got around the first, downwind mark, we were crowded with boats who had no business crowding us on normal, rational, non-fun courses. But the remainder of the race was fun in the sense it provided me with novel problems, navigation wise. The conditions were fun: significant wind and wave action.

Not to mention our granddaughter sailed with us. Last but not least! That made the day 'specially fun!
Posted by Doc Häagen-Dazs at 7:52 PM 16 comments:

Here's to My Crew of Irregular Amphibians!

Today's beer can found me still struggling to achieve some critical mass in my crew. Almost half of our people this afternoon had not sailed with us this season. But the real problem is with my pessimism. I have forgotten how quickly the younger set learn what has to be done and pitches in to find their role in their team's work. My key recruiting criterion has become that they just have to be physical fit amphibians. 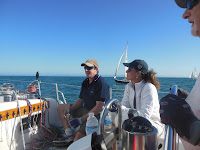 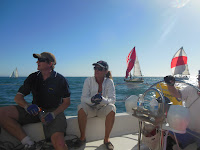 Such is the case with this afternoon. A new main sheet trimmer materialized before my eyes. (Unfortunately, IT-Man goes on vacation in a week.) And, with my Spinnaker Maestro in Hawaii, we promoted a recent addition who has become a regular to the bow: Kiteboarder was a quick learner as a spinnaker trimmer. We had one returning guest who serves ably as Morale Officer. And a one-time guest, White Water Woman, was also put to important work in spinnaker retrieval and photography roles. So my crew of irregulars was happily kept busy.

Especially so today. Winds steady at 14-15 knots. Very close encounters with the Ranger-33 and the C&C-41. Just to mention a few! And not to mention the day's real hair-raiser: my really dramatic swerve into our slip while I was micro-managing IT-Man's rigging of a dock line. Das Boot survived, with her fresh new paint intact, finishing 10th out of 17 and correcting down to 13th. But that's not the bottom line.

We had a great sail and a great party in the bar with other crews afterwards. Sometimes a good wind is almost as good as a good win.
Posted by Doc Häagen-Dazs at 8:13 PM 4 comments:

Wind was forecast for race time was at 13 knots and provided for hourly increases to 15 and 18 knots.

And, in my email, I received a wind advisory from the county office of emergency management warning of

In fact, we were out there sailing a 6nm course for three hours and the wind only briefly came up to 7 knots.

Other than character-building, the only high points were passing two boats in the last 500 yards to the finish line. When one of them had passed us 20 minutes earlier, the snarky helmsman had flashed us with the bye-bye hand wave.
Posted by Doc Häagen-Dazs at 10:15 PM 6 comments:

Any Day Afloat Beats Any Day Aground 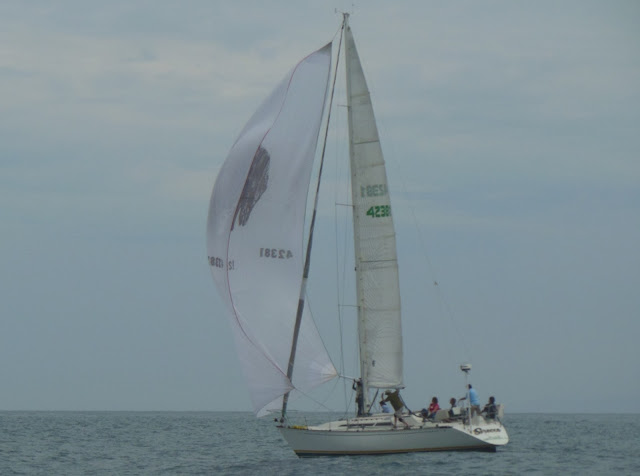 Very humid for our climate: drops of rain on my windshield as I drove home. Since there was no wind evident, I was hoping it would be unstable.

We actually started in 17 knots but it dropped to well under 10 before we could complete the weather leg. As, naturally, did Das Boot. At least the light winds were not accompanied by large seas. It was comfortable and relaxing sail. MD drove most of the race.

When the C&C pulled Bob Marley out of the bag, we thought we had a chance. But Bob hurt us today.
That crew has got that boat dialed in by now.

Das Boot finished 12th out of 16 boats. That's her par for the wind with which she was presented today.
Posted by Doc Häagen-Dazs at 7:27 PM 4 comments:

Pursuit race in 17-21 knots. 25 boats in the event. We were shorthanded, missing Kite Boarder,  Rookie Trimmer and Mastman. Just the four of us. At least MD was aboard and drove for the 2nd leg and gave my right ankle a much-needed rest.


Elected to sail inside the kelp island, and maybe paid a little for it by snagging some grass around the prop. Also paid for my start which was at least 8 seconds late. Also paid for trying to cover a faster Hunter on the last windward beat; instead I should have tacked off to port and fetched the starboard pin.

Wind direction remaining stable, the least favored pin at the start should be the favored end at the finish. Right?

I Prefer Windsdays to Wednesdays! 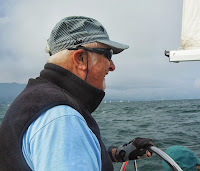 19 knots steady. Hit by a gust of 24 just before start. Without Spinnaker Man (he had to WERK), we ruled out the spinnaker at the outset. Knew we could get 'er up, doubted that we could get 'er down.

Sans spinnaker, I ruled out winning. I announced day's goals: (A) Safety for all aboard and (B) finish the race. The latter we knew would be a huge improvement over the week before.

18 boats on the line. A perfect start close to the starboard end of the line.

Decided on not trying on driving up through the kelp island straits because of control issues: I assessed the crew was still not intuitively smooth enough on tacking with the traveler alone. After today's experience I am more confident and would elevate that appraisal. Das Boot, at full hoist, had a bone in her teeth. Rounded windward mark in 4th or 5th. 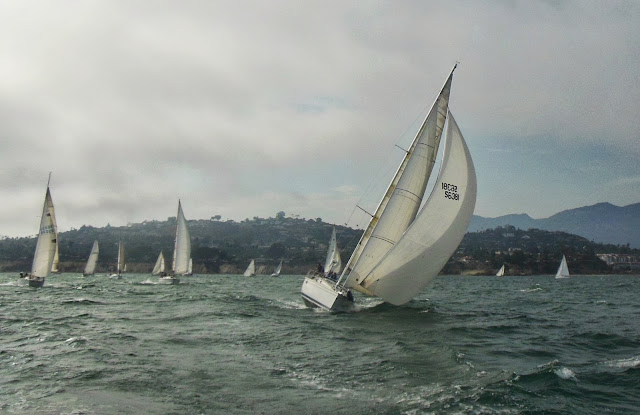 Without spinnaker, we were road kill for the Hunter in the photo above, which grabbed an inside overlap from us at the next mark. For the next two legs, we maintained our lead over the C&C.

I would not share the helm. Back-Up Driver told me later I drove like a 'banshee'. I felt I had been in The Zone. Rookie Trimmer received a 7th place glass. I had expected 5th or better, and told her to throw it back.
Posted by Doc Häagen-Dazs at 11:51 PM 4 comments: