The Clipper Around the World Race Is For You!

For me? Not so much....
Sunday, 31st of July, 10 identical 68ft yachts will depart at 16:30 BST from Southampton (UK) on the first of twelve legs on a 40,000-mile race around the world. I think this race calls itself as the longest race in the world, and is supposed to take up about a year to complete. That's including the lay-over at the end of each leg. The first leg sails from Europe to Brazil.

By Sean Lewis in the Santa Barbara News Press:


Ask Wann and Judy Rawles, and they might tell you that Hemingway got it wrong, so did Herman Melville. Sailing is not a quest for a great white whale, nor is it a solitary man's struggle. To the proud owners of Psyche's Song and partners of 42 years understand that sailing is an opportunity to spend a few hours on the sea where nothing matters but jibing, tacking and hoisting the spinnaker.

Can anyone identify this boat? Sailing in Martha's Vineyard (in the foreground)?
Posted by Doc Häagen-Dazs at 7:47 AM 12 comments:

Some days Yacht Racing is a non-zero sum game.

Some days, you're just glad to get back to your slip with the same number of souls aboard as you left with. Other days, you are just so happy to have escaped this side of the grass as they say, and gotten your deck shoes on a deck. And everyday you grab a few hours to get out and take in the air and the lighting that floats over you and the sea, the better off you are. Your life is not expended, but extended.

Today was such a day. Go figure: 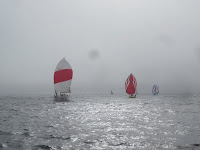 In 15-20 knots, I decided not to deploy the spinnaker and risk its non-recovery. Make it a learning experience, I said: let's take the full measure of our teeny chute's importance to our performance. Today's lesson was totally informative: we were passed off-the-wind by every one and his uncle, brothers and sisters. Usually, no one passes us on a free leg.

To keep what crew I had left from lapsing into boredom, I handed Reddog the camera and Spinnakerman the wheel. Both of them did good!

Thinking Outside the Box! Finally!

In memory of Dave, a new perpetual trophy has been minted. And with it a novel race course has been instituted. Not totally novel, but at least it's not a variation of the same ol'wretched and boring triangular courses. 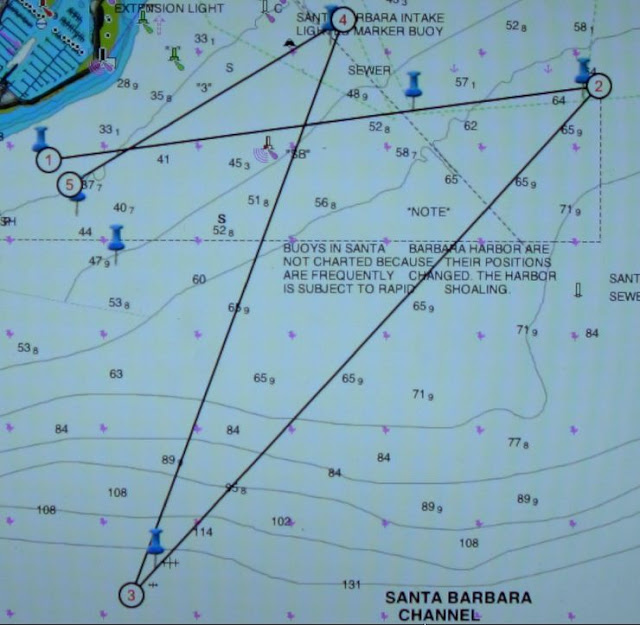 This was a 6nm course with four legs. But we all had to find H-Mark (#3) from a whole other quarter - southeastern - and it was like we were suddenly sailing in a whole other venue. People could not believe their GPS's, which is the way you want it! The Good Guys did okay: 8th out of 20 boats in 15-18 knots. The wind came up - bang! - right at the downwind start!

Now if the Fleet Leadership will just consider some courses with down-wind finishes, we'll have a start at attaining the diversified sailing experience our venue is capable of providing us!
Posted by Doc Häagen-Dazs at 10:07 PM 3 comments:

Waters Run Through Them

Each of us here today will, at one time of our lives, look upon a loved one who is in need, and ask the same question,


We are willing to help, Lord, but what, if anything, is needed? 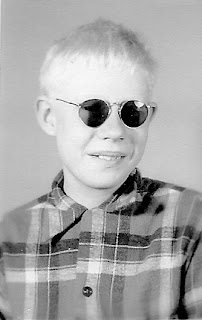 It is true: we can seldom help those closest to us.

Either we don't know what part of ourselves to give or, more often than not, the part we have to give is not wanted. 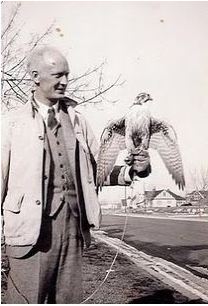 And, so it is these we live with and should know who elude us.

But we can still love them. We can love completely, without complete understanding.

Long ago, rain fell on mud and became rock. Half a billion years ago.

But even before that, beneath the rocks, are the Words of God.

To Him, all good things, wind on the water, and sailing as well as salvation, come by Grace.

And grace comes by art, and art does not come easy.

Now, nearly all those I loved and did not understand in my youth are dead. …. But I still reach out to them.

Of course, now I'm too old to be much of a sailor and now I never sail the big waters alone, because some friends think I shouldn't.

But when I am alone in the half light of the channel, all existence seems to fade to a being with my soul and memories.

And the sounds of the big Pacific surf and a four-count rhythm and a hope that a steady 15-knot breeze will rise.

Eventually, all things merge into one.

And water runs through it.

The oceans were delivered by the world's great floods and run over the rocks from the basement of time.

On some of the rocks are timeless rain drops; 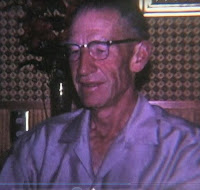 under the rocks are The Words...

and some of the words are Theirs.

I am haunted by water. 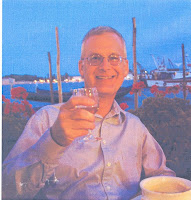 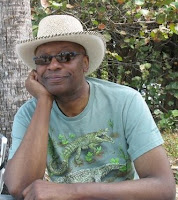 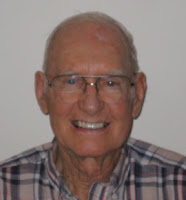 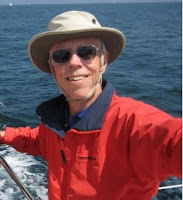 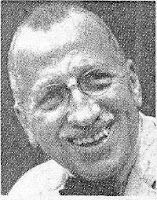 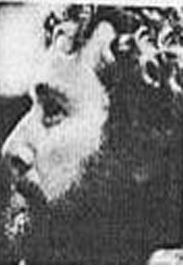 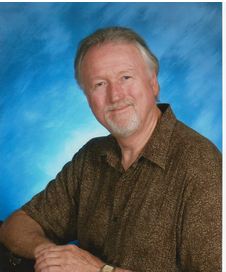 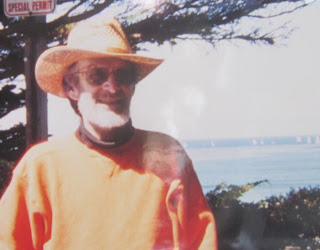 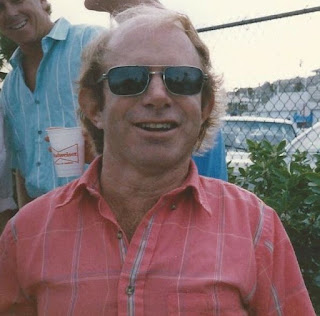 I never saw them again. The sea took some, the steamers took others, the graveyards of the earth will account for the rest. Singleton has no doubt taken with him the long record of his faithful work into the peaceful depths of an hospitable sea. And Donkin, who never did a decent day's work in his life, no doubt earns his living by discoursing with filthy eloquence upon the right of labour to live. So be it! Let the earth and the sea each have its own.

A gone shipmate, like any other man, is gone for ever; and I never met one of them again. But at times the spring-flood of memory sets with force up the dark River of the Nine Bends. Then on the waters of the forlorn stream drifts a ship--a shadowy ship manned by a crew of Shades. They pass and make a sign, in a shadowy hail. Haven't we, together and upon the immortal sea, wrung out a meaning from our sinful lives? Good-bye, brothers! You were a good crowd. As good a crowd as ever fisted with wild cries the beating canvas of a heavy foresail; or tossing aloft, invisible in the night, gave back yell for yell to a westerly gale.

Joseph Conrad
Posted by Doc Häagen-Dazs at 1:21 PM No comments:

Tonight we had the hard core aboard minus Bowman. Thanks to MVP's peerless coaching, we did better than okay with Newby's hands on the controls. The Good Guys got an excellent start in clear air in 14-15 knots at times. 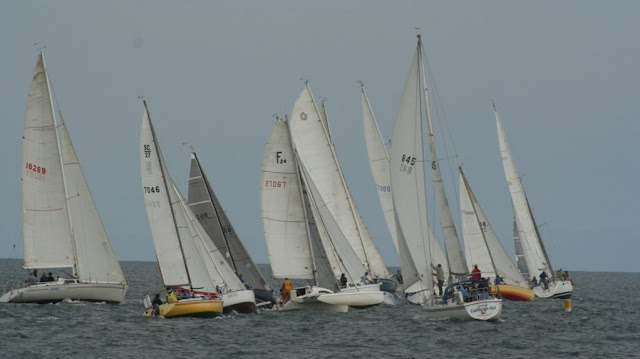 Had an excellent beat to the weather mark, skimming the kelp fields, and providing for a down-coast current. Now that the Hunter-Legend has a spinnaker, we see less and less of her, and instead find ourselves by ourselves firmly and securely in fifth place: way behind the leaders and way ahead of the followers. Liberty has a new owner who will eventually dial that wounded yacht in. Until that happens, we can work on maximizing our off-wind speed unmolested by traffic. We corrected out as we sailed: 5th out of 15 boats. Forgot my camera. So the shot above of the start was borrowed from Janer of Sailing Anarchy.
Posted by Doc Häagen-Dazs at 8:22 PM 3 comments:

Here's the source. To play even with a player short for an hour against a team that is technically superior (in terms of ball control) and still pull it out was incredible! As Trophy Wife and I watched our Tivo version, Doberwoman was freaking out with our yelling, and running out the front door. Neighbors across the street became alarmed. I can't say anything more about because I am thrashed. News at eleven....

My son says it best:


One of the top 5 U.S. Soccer games of all time....Only ... the late moment drama of yesterday's game. In terms of the entire game story line, the arching drama is really first on my list now. That cross will be the stuff of legends--must have been 45 yards, pin-point perfect. Backs broken all over the field--devastation for Brazil. You could see the will drain from their exhausted faces--I knew that Brazil was done, and that we were moving on. An incredible moment.

The Brazilian star, Marta, is so good you love to hate her. But the USA has a very special team.

Megan Rapinoe has always been my 2nd favorite player on this team. She's usually a 2nd half sub, but she always lights up the place with her placements. In one of the greatest personal play-by-plays ever delivered, Rapinoe said,

Iconic. Brandi Chastain and Mia Hamm move over! (Well maybe move over if this current group finish off on the World Cup, anyways.)
Posted by Doc Häagen-Dazs at 12:30 PM 10 comments:

You can tell this book by its cover, which gives most of it away in the title. Except that many keel boat sailors, especially cruisers will like the details of boat and sail handling, as well as salivate over navigational details in the passage between Puerto Vallarta and the Marquesas Islands. Author Steve Van Slyke is an accomplished blue water sailor and has published a nonfictional account of his experiences in Kavenga's Wake.

For myself, I had trouble in the early going with my suspension of disbelief. I found plausibility problems with the early details in this whodunit story line. But that's because I was overlooking a lot; as Trophy Wife comments, often I have difficulty with paying attention. So fault the reader, not the writer.

In the end, which is worth pursuing, all is tied together. Even for this non-cruiser.
Posted by Doc Häagen-Dazs at 7:01 AM 5 comments:

We're gearing up to go down to the docks a couple of fingers further than our slip for what is a perennial 4th of July event for us. Around 6 PM to fireworks. The docks are really crowded, generally. And as the night wears on the crowd gets drunk, generally. So we meet, greet, eat, and drink up and leave before the fire works happen: don't want to be caught in the rush hour in the dark and on the docks afterwards. 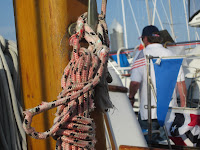 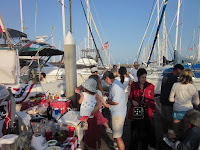 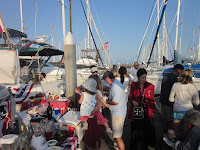 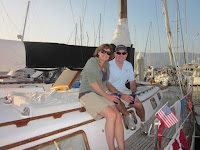 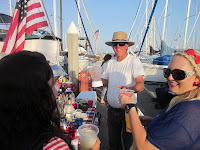 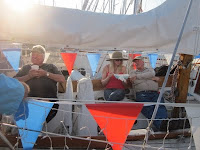