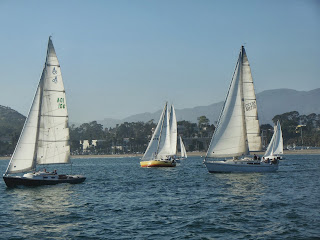 We had a steady 10 knots at the start, leaving us a bit under-powered for contesting at the starboard end of the line. Consequently, I opted for clear air & water somewhat down the line. The breeze started a slow deterioration mid-way up the first leg. With the tide out and the breeze light, I chose not to go into the beach.

We took it fairly in the britches, that first leg. Good crew work got the chute up and pulling soon after rounding the weather mark. Seas were flat, so sailing in 5-6 knots off the wind did not put us at as terrible a disadvantage as in the windward leg. We found ourselves in the back end of the front half of the fleet. Pretty normal. However, the still steady breeze dropped to 2-3 knots and boats in front of us lost their way and boats behind us dropped out. Carrying the chute up on three of the four legs, we finished an incredible 5th (corrected) place out of 20 boats! 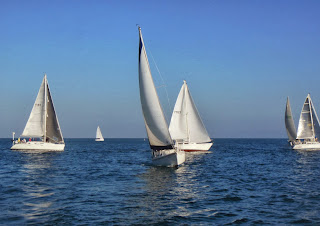 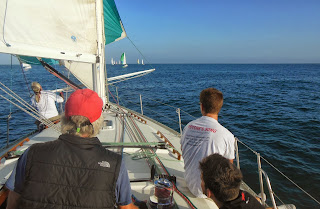 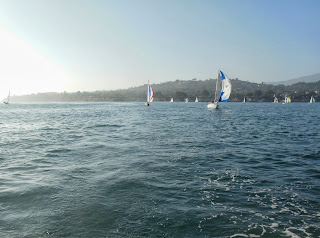 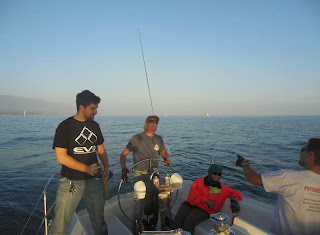 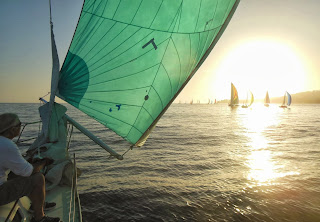 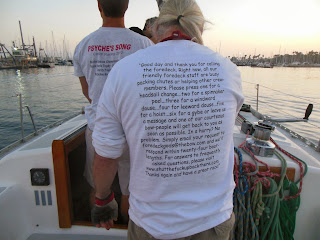 Maestro's shirt displays the attitude what got us through. Newman collected his 2nd glass!
Posted by Doc Häagen-Dazs at 7:32 PM 1 comment:

A Strong, Jolting Dose of Realism

This was my dream boat, something which I thought would make me competitive in all conditions (2-20 knots of apparent) which we experience in our venue. 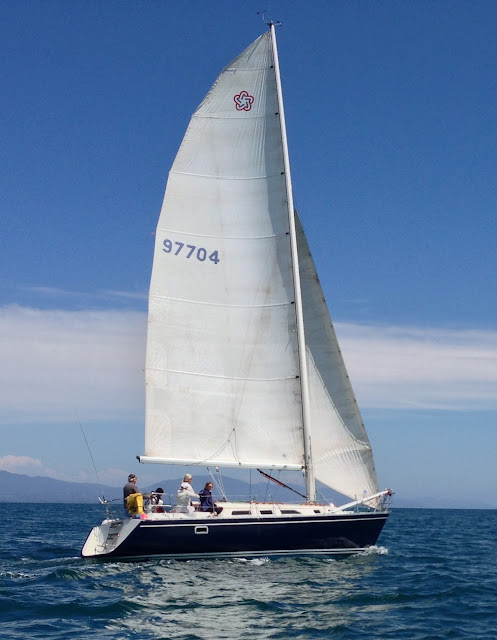 But here is Das Boot.

After much loss of sleep and cash, we decided today to stay with the rig what has brought us thus far through the dance.

Posted by Doc Häagen-Dazs at 9:29 PM No comments: 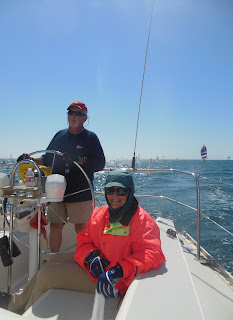 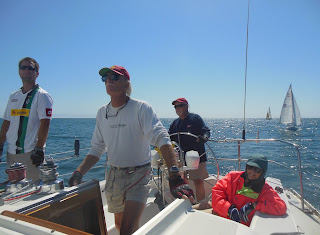 Perfect start in 15-19 knots. I don't know how it happened, exactly. There was no element of desperation, as my mind was clear on what I wanted to accomplish as it has been on all my starts this year: no exchange of paint or skin. Today, we didn't even exchange words with other crews.

There was a lot of congestion and traffic on the starboard pin. I approached with care from a slightly barging position. TW was aboard for the first time in memory and was giving me a perfect countdown. I recall feeling content with a plan B that allowed me to take the escape route: take sterns of the leading echelon, cross the line and tack off on to port to the beach. Instead, a clump of boats clustered around Bon Marley and maybe the Beneteau and the Hunter. I don't know who else was there. All I could see was the huge hole opening between them and the pin. Das Boot was able to slide right in, going full-bore, right on the gun! Snatched triumph from the jaws of defeat! Crew work was flawless. We even got a thumb's up sign from Bob Marley! We had captured and were in control of the entire fleet off to port.

I should have stayed there. But I couldn't think outside of my own, self-constructed box. Instead of tacking off toward the beach for the Kelp Straits, I should have run the leaders out to sea. Newman is my 'nagavator' now, but he was quiet. I need to get him back into the nagging mode. I sail better when there is talk on the boat. I was so full of myself, I guess, I couldn't reassess.

So I took the formulaic approach, tacked off to port and to the beach. There was the Ranger-33. Eventually he tacked back on to starboard and we had a port-starboard situation. I thought I had it wired like I had the start. But a huge shift occurred. He got the lift and we were headed. He had to alter course and we had to do our penalty turns. I probably lost more than a half of the 18 boat fleet in the process. The only way we caught Bob Marley was when they had trouble gybing under their chute.

A very good day on the water. It could have been a so-perfect day. I'm still trying to assess the learning(s) to take away from this day.
Posted by Doc Häagen-Dazs at 9:11 PM 4 comments:

On Coming in First!

Reaching start on port, at the port end of the line. Actually, a near perfect start with only one hull between us and the pin. In the 3-7 knots of easterly, I executed my momentum starting tactic perfectly: on the correct angle to the pin and at a correct distance from the start line I cut off the engine which had given us 3 knots of speed over the ground with a little more than 4 minutes to the start.

Everyone (who counts) was aboard except for Trophy Wife and Mastman. But our combined talent was wasted because the wind could not prevail over the current which sucked much of the fleet in to the Sargasso Sea of kelp next to the cliffs. I promised everyone that when it came time to tack out on port, I would turn on old sparky if 4 knots of wind didn't show up in time. It didn't and we did. We were the first of 15 to see the light and abandon.

First crew to the bar, wins!
Posted by Doc Häagen-Dazs at 9:53 PM 7 comments: