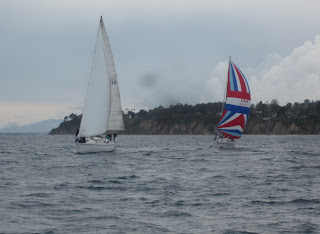 Oh how I like to see the bows of the opposition boats -- as opposed to their sterns!

The 3rd twilight beer can race of the season will be scored as the 2nd, and for the series we stand in 2nd place out of a dozen boats. Not bad, for this reluctant skipper.

But what have I learned from this race? The goal of getting a good-enough start is reinforced. It's much safer than going for the perfect start. And, it's much safer than going for a "safe" start. A safe start is too defensive and lends itself to last-moment desperation moves to 'save' the situation. As it turned out, we were able to witness a resounding collision, and able to push a third boat over the line early.

In the bar afterwards, I went over to the table of the 4th place boat and offered to buy his foredeck dude a beer. But they had already flogged him and sent him home. He had tangled their spinnaker halyard up with the lazy jacks. I was busted for Schadenfreude. Once again.
Posted by Doc Häagen-Dazs at 8:31 PM